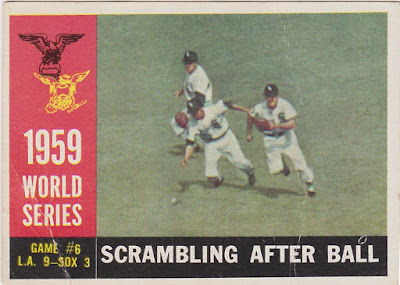 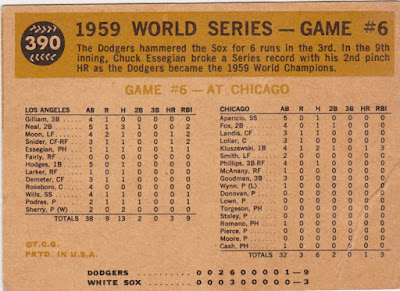 The Card: This is the sixth of Topps' seven card subset commemorating the '59 Series. Game Six was the final game and as the box score indicates was won by the Dodgers, 9-3. Larry Sherry won his second game in relief.

I like to play card detective and find the circumstances around the photos that Topps uses on cards of this era. I've had some pretty good luck in the past. But this one has me stumped. I can't find the original photo at any of my usual websites for this sort of thing.

Topps doesn't necessarily often use photos that come from the game or moment that the front of their World Series or 'special' cards depict. There is no way to identify the three White Sox players on this one although if I was forced to guess I'd say the player reaching down for the ball is Luis Aparicio.

Posted by Commishbob at 6:17 AM