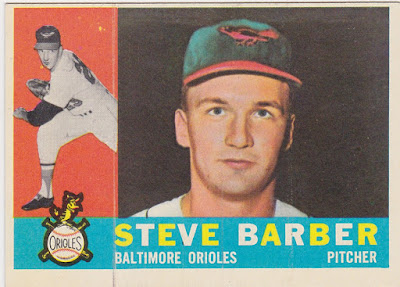 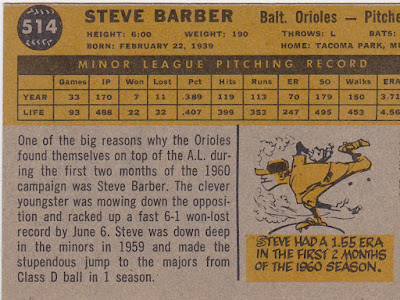 Career: Steve Barber spent 15 seasons in the majors for seven different clubs (eight if you count two spring training camps with the Brewers, 1970 and 1974, nine if you count his signing with St. Louis although he never pitched for them). His longest tenure was with his original club, the Orioles. And it was in Baltimore that he had his most success. He won 20 games for the '63 Birds, nearly a quarter of their 86 wins that year. He was the first Orioles pitcher since their move from St. Louis to win twenty in a season. He made the '63 and '66 AL All Star squads but didn't pitch either year. Elbow issues plagued him throughout the second half of his career and kept him from appearing in the '66 World Series for the Orioles.

In 1960: He was part of what became known as the 'Baby Birds' staff. Barber, Chuck Estrada, Jack Fisher and Milt Pappas all won double digit games and all were aged 21 or under. barber won his first game in his second start with a complete game, six hit performance against the Red Sox. He went on to go 10-7 with four of those wins coming against the Athletics. He led the AL in walks and wild pitches.

WikiFacts: "Barber started out the 1967 season in impressive fashion, holding the Angels hitless before Jim Fregosi doubled with one out in the ninth inning. Two weeks later, however, Barber pitched his most memorable game.

Facing Detroit in the first game of a doubleheader at old Memorial Stadium, Barber took a no-hit bid and a 1-0 lead into the ninth inning despite severe bouts of wildness. Barber walked the first two batters in the ninth, then retired the next two hitters. But he threw a wild pitch that let the tying run score and, after yet another walk, was pulled from the game.

Stu Miller relieved, and the Tigers scored the go-ahead run on an error. The Tigers wound up winning 2-1 despite getting no hits. Barber's line that afternoon: 8 2/3 innings, 10 walks, two hit
batters, a wild pitch and a throwing error." -from Barber's ESPN obit

The Card: Steve Barber has always been a favorite of mine so his cards normally get 'extra points' with me. But this one, despite being his rookie card, isn't all that special. Not a bad color combo but the photo appears to be airbrushed and the background is non-existent. What is cool is that as a late series card Topps was able to account for Barber's impressive start to the 1960 season when doing the text for the reverse. That's a rarity these days.

Posted by Commishbob at 7:09 PM