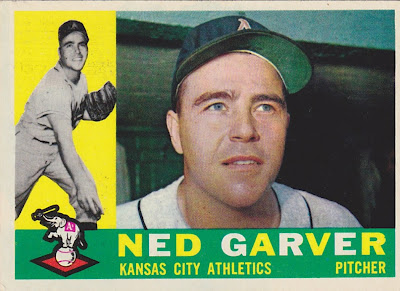 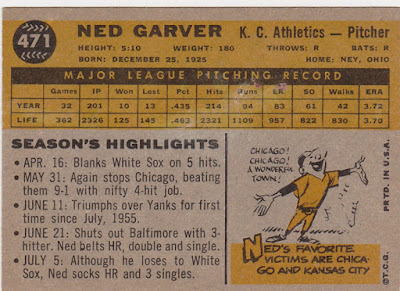 Career: In 14 major league seasons Ned Garver was a fine pitcher who was only a real part of one winning team, the 1955 Tigers. And even that team was only four games over .500 and finished fifth in the 8 team AL. For the rest of his career Garver had to make due with the satisfaction of being the best pitcher on lousy Browns, Athletics and Tigers clubs. He was a good hitter and he led the AL in several fielding categories throughout his career. He allowed a hit and an unearned run as the starting pitcher in the 1951 All Star Game. He finished his career with the '61 Expansion Angels.

In 1960: Just a year away from the end of his career Garver went 4-8 with the Athletics. But in line with the rest of his hard luck career his stats were very good: In 122 innings he allowed only 110 hits and his 1.185 WHIP was his best in half a decade.


Garver's [1951] season (20 wins, 12 losses, and a 3.73 ERA in 246 innings) was the most celebrated season in Browns history since George Sisler batted .420 in 1922. Garver became the first pitcher in major league history to win 20 games for a team which lost 100 games (the Browns won just 52 times), and was the first pitcher to win 20 games for a last place club since the White Sox’ Hollis "Sloppy" Thurston in 1924. Garver also batted a career-high .305 (29-for-95) with nine runs batted in. Leading all AL pitchers in WAR for the second consecutive season and all AL pitchers in total WAR from 1948-51, Garver reached the apex of baseball before a series of arm and leg problems cropped up in 1952 and affected him the rest of his career. Named to his first and only All-Star team, Garver started the game against Robin Roberts and pitched three innings, allowing only an unearned run.

Added Extra Stuff: Interesting story of a recent interview with Garver is found here:
Eighty-nine year-old former pitcher Ned Garver was simultaneously of his time and ahead of it
Of particular note is Garver's explanation of why his hitting prowess fell off so much after 1951 when he was second in the MVP voting, won 20 games for a horrific Browns club and had a better average and OPS than any of the teams regular position players.

The Card: Kind of neat that the card is done in yellow and green. The A's were still a few years away from the 'Charley Finley make-over'.