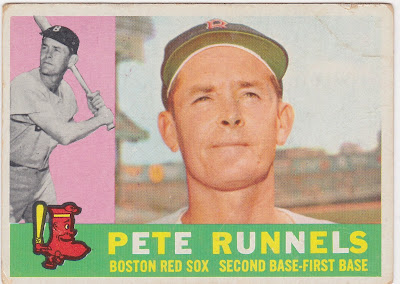 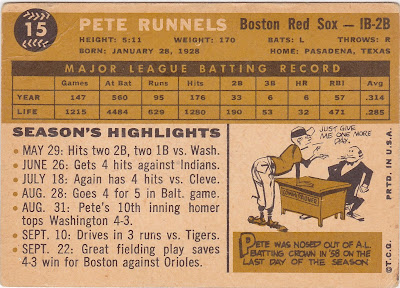 Career: Pete Runnels played fourteen seasons in the majors, seven with the Senators, five with the Red Sox and two with the Colt 45s as he was winding down his impressive but underappreciated career.

Runnels was an excellent defensive player at all four spots in the infield at various times. He won two AL batting crowns with the Red Sox and was an All-Star three times. He was close to winning the batting title in 1959 but finished just behind Ted Williams as they fought it out in the closing days of the season. His reward for the '62 title was a trade to Houston for Roman Mejias.  He didn't hit for power but his career batting average was .291 and he had a .375 OBP. He hit .320 for the Red Sox in his five seasons there.

He coached for Boston for two seasons after his playing days and had a 16 game stint as interim manager at the end of the '66 season.

Following that he returned to the Houston area and opened a couple of businesses in the Pasadena area just over the bridge from me. One was Pasadena Sporting Goods which I helped keep in business for a while!

WikiFacts:  From his SABR page--


Runnels was inducted into the Texas Sports Hall of Fame in 1982 and the Red Sox Hall of Fame in 2004. His career .291 average is higher than many of those in Cooperstown. His name lives on in an annual Lufkin high school baseball tournament, the Pete Runnels Texas Shoot Out.


The Card: As noted previously I like cards that include pink but this one just has too much going on. And that's saying a lot for this set. Pete looks wistful there at Yankee Stadium. Or maybe the sun is bothering him.
Posted by Commishbob at 12:25 PM