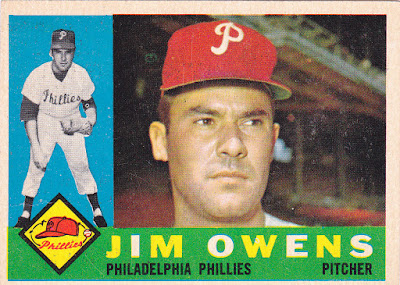 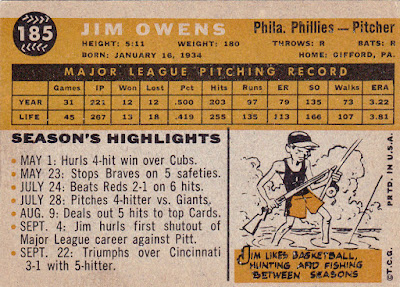 Career: Jim Owens began his pro career as a 17-year-old deep in the Phils' organization and had a rough first year but quickly became a big winner as he climbed the ladder to the majors. He was 0-6 over a couple of short looks in Philly. But when he returned from a two-year Army obligation in 1959 he had his best overall season. He was 12-12 with an ERA of 3.21 in over 30 starts. He never again had that many wins. Or starts, for that matter.

His career played out in bars and nightclubs in NL cities, and he ended up evolving into a reliever for the Phils. Then it was on to the Reds for a year and to Houston where he pitched out of the 'pen through the middle of the 1967 season. He finished with a 42-69 record and a lot of stories.

Owens pitched his last big league game on June 20, 1967, for the Astros against the Mets in New York. Half a country away my family was that very day, moving into our first house in Houston.

In 1960: He tanked and his numbers reflect that. From 12-12 he slipped to 4-14 with an ERA of 5.04 and a terrible WHIP. He lost his rotation spot for a month beginning in July but got it back with a few decent middle relief efforts. He closed out the year as a starter but his days in the Phils rotation were numbered.

Off The Charts: Owens was a member of what was known as The Dalton Gang, a group of Phils pitchers that had a thing for nightlife and the 'fun' that goes with it. This great Sports Illustrated story from their June 13, 1960 issue contains this paragraph:

The Dalton Gang has taken a lot of liberties since its formation. [...] Owens' aftergame behavior was bad enough to warrant a special lecture on the subject by General Manager Quinn when the two discussed Owens' 1960 contract. Owens was promised a $500 bonus if his conduct this year met the club's approval. The Bear didn't even make it through spring training. He got involved in a barroom brawl in Florida, lost the bonus and was fined an extra hundred to boot. For one day he quit baseball, during which time he explained to reporters that he was that rare kind of pitcher who could stay up all night drinking and then go out and throw a shutout.


Owens comes from a broken home. "His father used to come down to breakfast and put a bottle on the table," says a man who knows him. "Jim started drinking early."

It's not a long story so it's well worth a look. For more on The Dalton Gang, check out this entry on Seamheads.

And Houston sportswriter Mickey Herskowitz, writing about his memories of the Astrodome, related this gem:

My lasting memory of the official opening night was not of the packed crowd, which included a president and a governor and the seven Mercury astronauts. It was of a scene in the Astros’ bullpen, where amid all the fanfare a pitcher named Jim Owens was stretched out on a bench, sleeping off a hangover. The uninhibited Turk Farrell gave him a shove and bellowed, “Hey, Owens, wake up. Where do you think you are, in a canoe?”