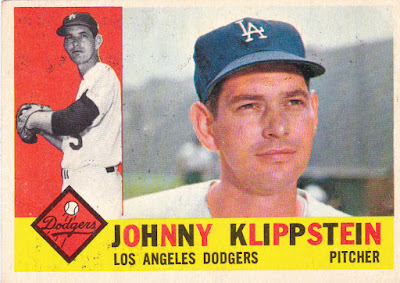 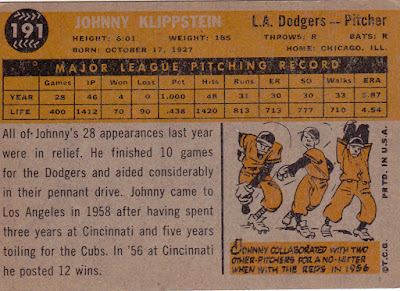 Career: Klippstein pitched professionally from 1944 through 1967. He signed his first contract after attending a Cardinals' tryout camp on a whim at the age of 16. He was, at that point, the grizzled veteran of one season of high school ball. His big-league debut came with the Cubs in 1950. He'd spent five seasons in the minors, been drafted into the Army, and been drafted twice more,,, by the Dodgers from the Cards and by the Cubs from the Dodgers.

Klippstein went on to pitch for eighteen seasons for eight clubs. Through most of the fifties, he jumped from a starter's role to a reliever's one for the Cubs and Reds. Cincy moved him to the bullpen in 1958, and he was a bullpen guy for the rest of his career. He threw hard but was plagued by wildness as a starter. He claimed that pitching more frequently out of the bullpen helped him gain more control of his pitches. Klippstein pitched in two World Series, first with LA in '59, and then with the Twins in 1965. He threw 4.2 scoreless innings over those two Classics.


In 1960: He was sent to the Indians on the eve of Opening Day and, being told he would be the team's closer, had one of his best years. He tied for the league lead with 14 saves, easily a career-high.

Off The Charts: A funny story from his SABR bio: In one of the most memorable games of his career, Klippstein relieved Bob Purkey to start the 11th inning in a 0-0 game against the Houston Colt .45’s at Colt Stadium [in 1962]. In the top of the 13th, Klippstein hit his fifth career home run, a solo shot, and then pitched his third consecutive scoreless inning to give the Reds a 1-0 victory, the first time a National League pitcher had won a 1-0 game in extra innings with a home run. Circling the bases, Klippstein said, “I looked to Bob Aspromonte who was playing third base, I said, ‘If you think you’re surprised, imagine how I feel?’

After retirement, Klippstein was a loyal Cubs fan and season ticket holder.  He was also active in their Old Timers Association.
Posted by Commishbob at 6:30 AM