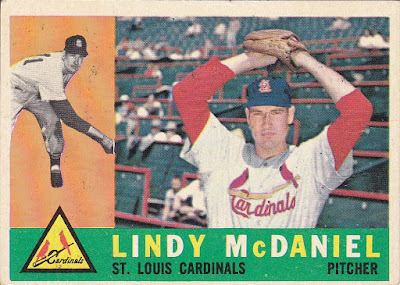 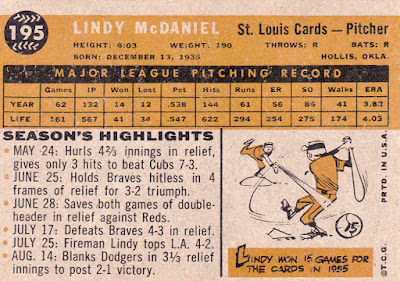 Career: Lindy McDaniel pitched 21 seasons in the majors in a career that lasted from 1955 to 1975. He worked in 987 games, 913 in relief. He pitched only eight games in the minors and those came after a rough patch in 1958 and the demotion marked the end of his time as a starter. That period came primarily in 1957. He was back in the bigs after that short 'cooling-off' and found a home in the bullpen.

The Oklahoma native played for the Cardinals through 1962. Having seen his effectiveness decrease after twice leading the league in saves, they dealt him to the Cubs, and he rebounded nicely. In '63 he won his second Top Reliever Award and again led the NL in saves. He called Wrigley home for three years, spent a couple of seasons with the Giants, and then was an effective middle innings guy (and sometimes stopper) for the Yankees for six more. McDaniel finished up with two years in KC as a Royal.

In his career, he won 141 games against 199 losses and racked up 174 saves. It's almost hard to believe that he spent so much time playing in the majors for teams with so many combined league titles, and yet he never once pitched in a post-season game.

Baseball-Reference lists every player's 'Similarity Scores', a list of guys who have numbers that are close to the numbers of the player being profiled. On the list they have for Lindy McDaniel the top five are Ron Reed, Hoyt Wilhelm, Tom Gordon, Goose Gossage, and Stu Miller. Wilhelm and Gossage are in the Hall. I'm not saying McDaniel was a Hall of Fame-caliber pitcher, but I would have thought he'd have picked up more than the couple of votes he got in the two years he was on the ballot.

In 1960: In a long and accomplished career, this season stands out as McDaniel's best. Cards manager Solly Hemus called on him 65 times, all but two in relief. McDaniel responded with brilliance. Pitching 116 innings he allowed only 85 hits and fanned 105. He made the NL All-Star team (surprisingly for the only time) and picked up the save in the 2nd of the two ASGs. He was 12-4 with a 2.09 ERA, led the league with 27 saves, had a WHIP below 1.0, and finished third in the Cy Young race and fifth in the MVP voting. McDaniel won the very first Fireman Of The Year Award as well. Hell, I have no idea what Win Probability Added is, but he led the league in that, too!

Off The Charts: I usually don't port over chunks from my other blogs but I thought I'd do so for this one. Here is part of what I wrote for McDaniel's post on my 1958 blog. It contains some links to McDaniel mentions on my Five Tool blog.

I've collected most if not all of McDaniel's Topps cards. He's been a favorite of mine for a long time. I've related several times the two 1970 games in which he participated that are among my most memorable ever. I wrote to him a few years ago and asked him about both games. Here is the letter with his responses:

He also sent along several of his own signed items with the cards I sent. He remains a good TTM signer and accepts donations to his Christian ministry.

Finally, a few tidbits about Lindy McDaniel. He had two brothers who played pro baseball. One of them, Von McDaniel, has a card in this 1958 set. His cousin is longtime University of Texas football coach Darrell Royal. He homered for the Yankees in 1972 and that's the last home run hit by a Yankee pitcher. When he retired in 1975 his 987 appearances were second all-time only to Hoyt Wilhelm. He's since been bypassed in that category by many others and currently ranks 17th. (Wilhelm is now 6th). 2020 edit: those numbers hold true.

And when I posted his '59 card on that set's blog I included this account of the game I mentioned in that letter:


One of the best regular-season games I ever saw involved Lindy McDaniel. I watched the Orioles and Yankees on July 8 of 1970 with my Dad on t.v. My O's were starting to put the Yanks in their rearview mirror and were coming off a dramatic 10th inning win the previous night. Brooks Robinson's bottom of the 10th grand slam had beaten, yup, Lindy McDaniel. I'd listened to that one on the Orioles radio network which, if I turned my portable Panasonic the right way, came in pretty darn clear in the kitchen of our house on the central New Jersey coast.

But the game in question was even better. The Orioles jumped out to an early lead with a three-run first in Memorial Stadium. Don Buford had led the game off with a homer and Frank Robinson had driven in a run with the first of what would be four hits on the night.

The Yanks tied it and took a lead of 4-3 quickly enough, the highlight of the comeback a three-run shot by Thurman Munson off Dave McNally. But the seesaw tilted back when Boog Powell and Frank Robinson blasted back-to-back shots in the bottom of the fourth! Jump ahead to the top of the 8th and the Yanks had edged back to trail only 6-5 and then broke out with homers from John Ellis and ex-Bird Curt Blefary. Now it's 8-6 New York in front and I'm pissed.

Lindy McDaniel is working his second inning on his second straight night in a tight game. Frank Robinson, never one to let a tense situation slip away without doing something special, drills his second homer of the evening to lead off the 9th and it's a one-run game again. Then Brooks Robinson and Dave Johnson single and I remember that I cannot sit down any longer. With Bobby Grich running for Brooks, Andy Etchebarren walks to load 'em up!

Now Terry Crowley steps up to pinch-hit and McDaniel buckles down. He fans Cro on three pitches. Ellie Hendricks pinch hits for the pitcher and McDaniel FANS HIM ON 3 PITCHES! So Don Buford steps up hoping to end the game just like he started it, with a bang. McDaniel gets him down 0-2 and now has gone from a bases-loaded jam to just needing one damn strike with 8 straight strikes. Holy crap. Then, dramatically, Buford strokes the next pitch into right field, Grich and Etch score and the neighbors can't figure out why I'm screaming. Birds win, 9-8.

That's a long, involved story but one I love telling. I brought the game up to Earl Weaver in a conversation I once had with him and after about a sentence and a half Earl took over the re-telling in his unique and colorful style. Good times.


Now, in 2020, re-reading my letter and his responses I realize I asked him to comment on two tough losses. Maybe I should have asked about a win or two!

McDaniel is now 85 and, at last report, is still signing thru the mail via his webpage for a small fee.

The Card: The orange/green/yellow/white works fine together, especially when it has the help of the great Cardinals' jersey and the Seals Stadium background. This is a favorite of mine.
Posted by Commishbob at 6:30 AM