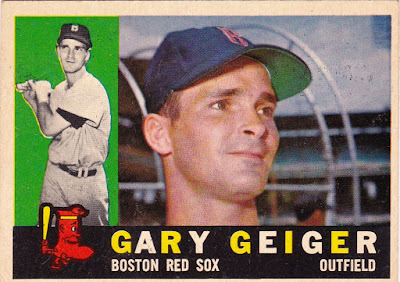 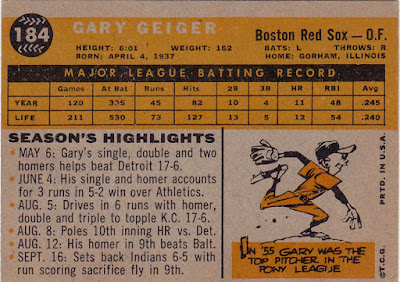 Career: Geiger played for four clubs in a 12-year career but got most of his work during a seven-season hitch with the Red Sox. He had been a Cardinals pitching prospect but was drafted away by the Indians and debuted with Cleveland in 1958 as a speedy outfielder with a touch of power and otherwise average offensive skills. He was traded to the Red Sox and was their regular center fielder for five years beginning in 1959 (when he could stay on the field).  Geiger's career was pockmarked with ulcer problems, concussions, broken bones, and other assorted ailments.

Beginning in 1966 he bounced around from the Braves to the Astros while making several separate appearances in the Cardinals chain. How that all worked I can't say.

In 1960: He missed about half the season due to an operation to correct a collapsed lung. In 77 games he hit .302 and his homer and RBI totals were on track to meet or surpass his career season highs.

Off The Charts: In 1955, deep in the Cardinals' system with Hamilton of the PONY league, Geiger was a 20-game winner on the mound.

Wikipedia reports that Geiger wore false teeth after his own, too soft to take fillings, had all been extracted by age 22.

He died of cirrhosis of the liver at the age of 59. It was likely a result of his drinking habit which he used to overcome his fear of flying during his career. 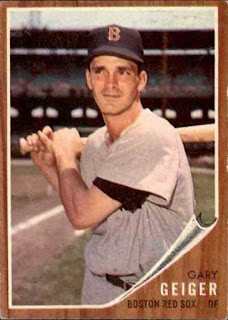