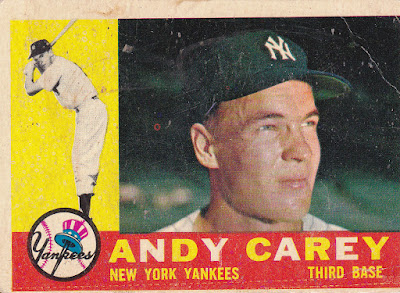 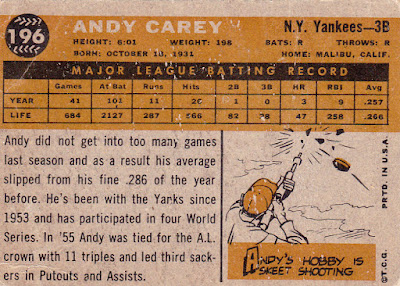 Career: Andy Carey's best days came as the regular (or mostly regular) third-baseman with the Yankee teams of the mid-50s. Coming out of St. Mary's College of California, Carey spent a season and a half in the minors and a season and a half on the Yankees' bench before taking over at third in 1954. He got the job (rather than 'won' the job) because of military service requirements and injuries among Yankee infielders. Carey never really had the confidence of manager Casey Stengel, but he held the spot, sometimes tenuously, through 1959. His above-average glove at third helped quite a bit.

Carey played on four Yankee pennant winners and won titles with the '56 and '58 clubs. He moved on to three other teams after his Yankee career and retired after the 1962 season. Carey finished with a .260 average and 64 homers.

In 1960: On May 19, having only gotten three at-bats and been deemed expendable by the emergence of Clete Boyer, Carey was fired off to the Athletics for Bob Cerv. He was handed the 3rd base job and played there as the regular the rest of the season. He hit only .233, but he hit 12 homers which matched his season-high. This was his last season to play in at least a hundred games and began a tour of a few new clubs (the White Sox in '61, the Phils, to whom he refused to report, and Dodgers in 1962) which finished off his career.

Off The Charts: Carey's life off the field was as turbulent as it seemed to be on it. He married numerous times. His first was to Hollywood fringe starlet Lucy Marlow. He worked in insurance after retiring, buried a son shot by police following an armed robbery gone bad, and was severely injured in a fall down some stairs later in life. He never fully recovered from that fall and developed dementia. He died at age 80 in 2011.