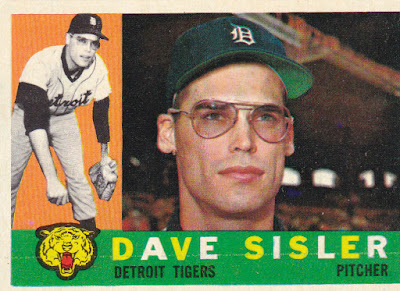 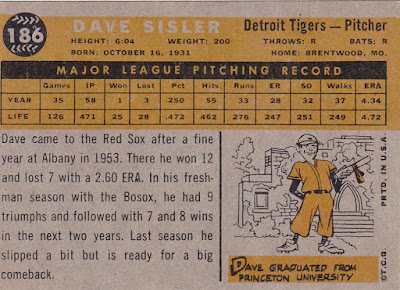 Career: A Princeton man, Dave Sisler was the youngest son of Hall of Famer George Sisler and brother of NL first baseman/outfielder Dick Sisler. After one (very successful) minor league season and a couple of years in the military, Sisler broke in with the Red Sox in 1956. His three full years with the Sox were pretty consistent as he hovered around .500 and a 4.75 ERA, mostly as a starter. He got a higher percentage of starting assignments each season. As the card notes, he struggled in 1959 and was traded to the Tigers in May.

He rebounded in Detroit, now pitching exclusively out of the bullpen. But was exposed in the expansion draft and was taken by the Senators. He was in D.C. for a season then traded to the Reds, pitching one final season in the majors and one in AAA in 1963.  He retired with 38 big league wins and became an investment broker.

In 1960: This was his best season statistically. He was 7-5 with five saves, which were not career highs, but his ERA and WHIP were easily better than he had ever posted or ever would.