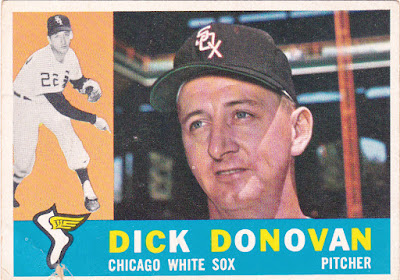 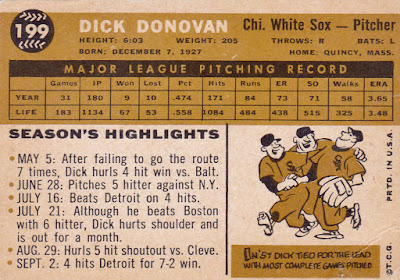 Career: Dick Donavan's career was a series of peaks and valleys. His first peak came in the second half of the 50s when he was a front-line starter for the White Sox and earned All-Star recognition. He averaged about 15 wins a year over a four-year span and in 1957 was second in the Cy Young voting. He also pitched very well in the '59 Series versus the Dodgers in a losing cause.

Donavan's second peak came with the Senators and Indians in the early 60s when again he was an All-Star and he had a 20-win season for the Tribe. He also won an ERA crown in the AL.

In 1960: In between those peaks came this valley. With a sore arm, Donavan pitched only 79 innings and was hit hard in pretty much all of them. It was bad enough that he was left exposed in the expansion draft and he ended up with Washington in 1961. That move led to his resurgence, his early 60s peak.

Off the Charts: According to Wikipedia...His friend Wyatt gave him the idea to sell insurance, and Donovan had a home business selling insurance during his MLB career. In 1963, he earned his stockbroker's license and joined the Boston-based firm Eastman & Dillon. After his baseball career, he served as the executive vice president for Bache & Co. In 1980, he opened a real estate appraisal office in Quincy, which he ran until 1994. Additionally, Donovan served as a distributor with Earth Care Products, a Quincy company that makes products out of recycled plastic.