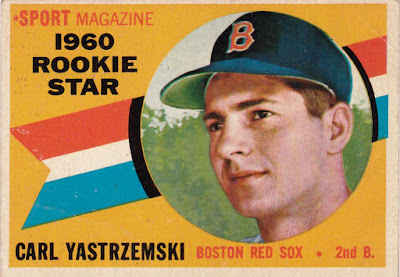 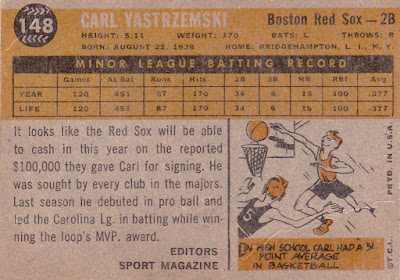 Career: He was the son of a Long Island potato farmer who passed along a love of baseball. And he landed in the Hall of Fame after a remarkable career that began with him stepping into the void left by Ted Williams' retirement.

Yaz played for 23 seasons with the Red Sox and had almost 425 at-bats at the age of 43 in his final season. Here is a list of his career highlights from the Baseball-Reference Bullpen:


What is there to add about this talented, consistent, and durable star?

In 1960:  Yaz was still a year away from his big-league debut. He'd torn up the league in B level ball in 1959, and he did the same when he jumped to AAA in 1960. For the Red Sox' Minneapolis Millers he batted .339 on almost 200 hits including 36 doubles. He only hit seven homers, but he was apparently saving his power for Fenway. He'd played second in his initial season but was moved to the outfield by the organization when he hit AAA.

Off The Charts: Yaz' grandson, Mike, has traveled through a few organizations but in 2019 seemed to find a home in the Giants' outfield and had a nice first big-league season. Last September he homered in his first game ever in Fenway Park. (See below)

The Card: This is one of the more valuable and sought-after cards in the 1960 set, definitely the prize among the rookies. My copy was a modest graded version that I freed from the slab. He's listed as a second baseman, but he was, as noted above, an outfielder in 1960.

It happens to be the last of the Sport Rookie Stars subset (they were alphabetical in the checklist).