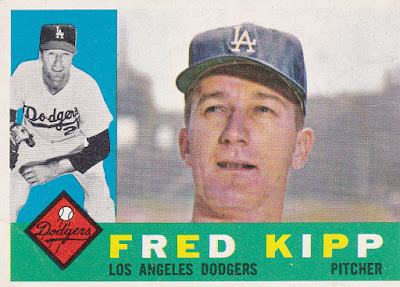 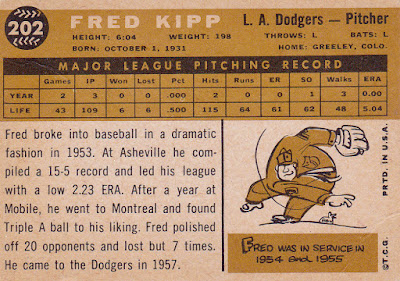 Career: Fred Kipp began his run with the Dodgers in Brooklyn when he signed in 1953. He had a really good year with a couple of their Class B clubs and then spent time with the US Army. He had some up and down results as a starter over three seasons in the minors before sticking with the Dodgers as a knuckleballing reliever in 1958. His numbers were not good.

Kipp was back in the minors in '59 and got a late call-up but wasn't on their World Series roster. The next three years were spent mostly at the top levels of the Yankees' system.

In 1960: Kipp was traded (at his request) to the Yankees on the eve of the season's opening. He made four appearances in pinstripes through the end of May and then was sent down to AAA Richmond where he had a fine year out of the bullpen.

Off The Charts: Kipp pitched (ever so briefly) on consecutive Series-winning staffs, the '59 Dodgers, and '60 Yanks. He totaled six games and seven innings.

Kipp has a website for the 2018 book he co-wrote with his son entitled The Last Yankee Dodger. The title comes from his being the last living player to have been a member of the Brooklyn Dodgers, The LA Dodgers, and the Yankees.

I had forgotten about his 1959 card and dug up my old post from that blog. Another Memorial Coliseum shot. 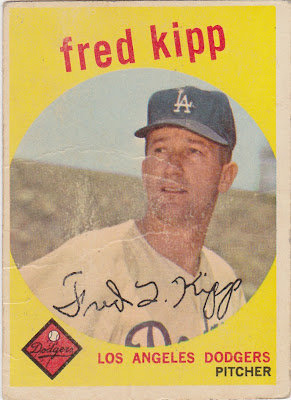 Kipp is a member of the Kansas Baseball Hall of Fame (don't laugh, Walter Johnson is in there, too. So is Ralph Houk) and attended Emporia State. I had a good friend who went there after we graduated high school in Jersey. Never really told me why.