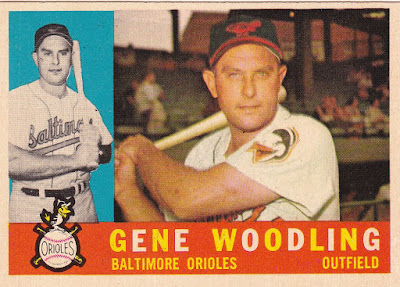 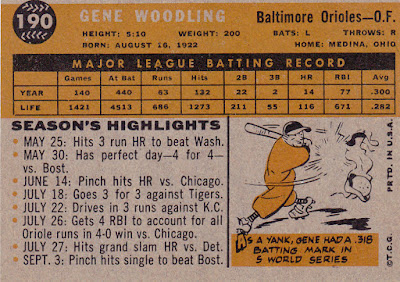 Career: Ohio kid Gene Woodling signed with the Indians in 1940 but it took him a decade to establish himself in the majors. Along that trail to the '49 Yankees (and the first of five consecutive Series titles) Woodling led four different minors leagues in hitting. He also toured the Pacific in the Navy and played ball with Bob Feller and many others. Woodling went from the Indians' chain to the Pirates and then to the PCL's San Francisco Seals before landing with the Yanks.

He had gotten a few looks at major league pitching but it wasn't until the Yankees stuck him into their outfield that he became an established big-leaguer.  In those five Series with the Bombers he hit .318 and added three homers.

From New York Woodling carried his potent bat (and underrated glove) to Baltimore, back to Cleveland, to Baltimore for another stay, to the Senators, and finally in 1962, to the Original Mets. That was his last season as a player. He retired with a career .284 average (he hit over .300 five times). He was still swinging well at 39 with the Mets in '62 as he hit .274 in 80 games after coming over from the Senators.


Off The Charts: He was involved in one of the biggest (in terms of numbers) trades in history in November 1954 when he was dealt to the Orioles. Here is the summary per Baseball-Reference:

That's seventeen players in total. There will not be a quiz later.

Woodling coached for the Orioles through 1967 and earned a sixth ring for the 1966 Orioles' title. He later scouted for the Yanks and Indians.
Posted by Commishbob at 7:00 AM