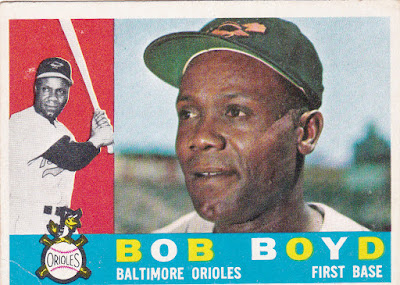 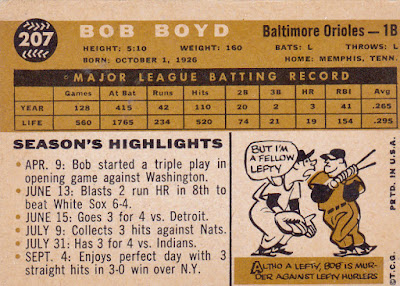 Career: Bob Boyd was a member of the Memphis Red Sox in the Negro Leagues in the late 40s. He became the first black player to sign with the Chicago White Sox in 1950 and made his major league debut in 1951 at the age of 31. After being held up in the Cardinals' chain for a few years, he played nine major league seasons including five with the Orioles. The man could hit line drives. His nickname was 'The Rope'. He had a career .293 average.

In 1960: Boyd had been the Orioles leading hitter for several years but he lost his spot at first base to the more powerful Jim Gentile. He played some outfield and pinch-hit and finished with a .317 average in less than a hundred at-bats.

Off The Charts: Boyd was the first player in the modern history of the Baltimore Orioles to hit over .300 in a season.