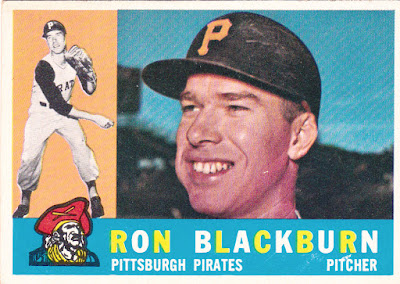 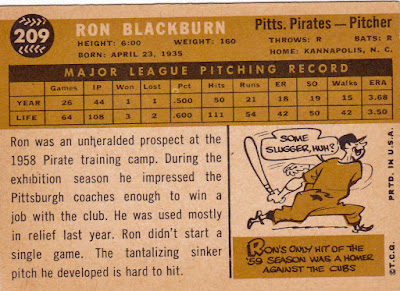 Career: Blackburn was a grinder in the Pirates' chain beginning with his 1953 signing. His numbers were mediocre at best but he made the majors in 1958 (his card notes a big spring training) and he pitched 63 innings, mostly out of the bullpen. In 1959 he had comparable stats but was shipped out in July and never returned to the big leagues. The final career data: 3 wins, 2 losses, a 3.50 ERA, and four saves in a season and a half.

In 1960: Relegated to AAA, Blackburn stayed there for 1960 (and most of the next four years. Splitting the year between the Bucs' two top minor league clubs, he didn't do much to earn another look by the Pirates.

Off The Charts: Wikipedia tells us that..."Following his playing retirement In 1964, Blackburn became a teacher and baseball coach at Western Carolina University, where he also attended school. The family lived in Cullowhee, North Carolina from 1964-1969 before moving to Morganton, North Carolina, where he worked as recreation director at the Western Correctional Center"

Blackburn made a detour into the Orioles system on his way up the ladder to the majors and spent a year with the Dodgers' AAA team on the way down. Baseball-Reference has no record of any transactions. Maybe those other clubs just borrowed him because they liked his smile.

The Card: Blackburn is wearing the batting helmet that the Pirates' pitchers sported on the mound in those days.
Posted by Commishbob at 7:00 AM