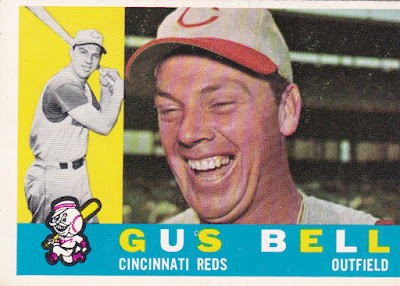 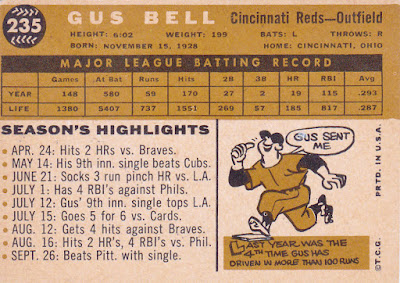 The Card: Yes, I changed the setup a bit, this card is awesome AF. I've wondered what it was that tickled Gus so.

...Did Jerry Lynch depants him as the shot was taken?

...Did Walt Dropo depants the photographer as the shot was taken?

...Make your own guess in the comments if so inclined.

Topps managed to squeeze nine highlights from Bell's '59 season onto the back.


Career: Outfielder Gus Bell carved out a fine career that covered 13 full seasons and bits of two more. Originally with Pittsburgh, Bell was a four-time NL All-Star. He had his longest, and most productive run, with the Reds from 1953 through 1961. Over that stretch, he had six seasons of hitting .290+ and had double-digit homers in all but one campaign.

He was one of seven Reds players who benefited from their fans stuffing the All-Star ballot boxes in  1957. Bell was replaced in the starting All-Star lineup but did enter the game as a pinch hitter for Frank Robinson and had a 2-RBI hit.

He finished as a part-timer for the Braves after a few months with the original '62 Mets. He'd been the eighth pick of the expansion draft and was an Opening Day starter. He was the first Met to reach base when he singled in the second inning.

He made three hitless pinch-hitting appearances in the '61 World Series. That was the end of his days in Cincinnati.

In 1960: Bell's number slipped from his excellent '59 campaign. His average was off by 31 points (down to .262) and his homers and RBI declined as well This proved to be his last year as an everyday outfielder with the Reds (or anywhere else for that matter).

Off The Charts: Gus Bell was the patriarch of a baseball family that included his son and two grandsons. Son Buddy was a long-time third base fixture for the Reds, Indians, and Rangers as well as serving as a big-league manager for nearly a decade. Grandson Mike played for many years in the minors and had a cup'o'coffee with the Reds in 2000.

Gus' other grandson, David, played for 12 seasons as an infielder for a number of different clubs. He had a respectable career and I was initially puzzled as to why his name didn't even remotely ring a bell with me. Then I saw that he played from 1995 through 2006. That span perfectly parallels my time away from baseball.

I also just found out that David Bell is the current manager of the Reds. For a guy with three fantasy baseball teams, I don't pay enough attention.