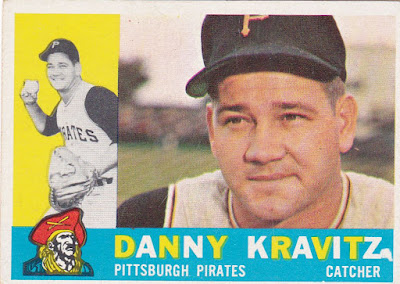 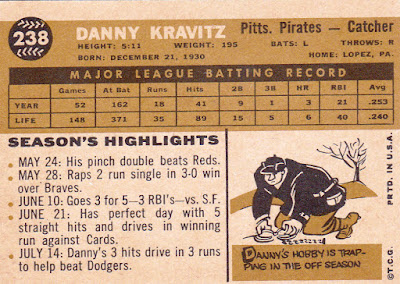 Career: Kravitz, yet another Pennsylvania native, began his pro career as an outfielder in the Pirates chain in 1949. He was a US Marine in 1952/53 and returned then to the Pirates. He was put behind the plate and made his way to the majors. After a few seasons of splitting time between the majors and the farm system, he was in the bigs in 1958 and served as the Pirates' back-up and pinch-hitter for a few years.

He was dealt to the Athletics where he played a season and then toured the minors in the Reds', Orioles', and Yankees' chains for three more years and called it a day. Over his five years, he hit .236 in 215 games and never displayed the bat he showed in the minors.

In 1960: The Bucs won the 1960 Series but, sadly, Kravitz had been traded to Kansas City in May and missed the party. In his nearly sixty games played he hit close to his career average. He was traded to the Reds after the season but never returned to the majors.

Off The Charts: His 2013 obit noted that his first major league home run occurred on May 11, 1956 in the bottom of the ninth inning with the bases loaded and the Pirates trailing the Philadelphia Phillies 5-2. Kravitz' walk-off grand slam gave the Pirates a 6-5 win.

His SABR bio has an odd vide to it, unlike most of those bios I've read. It's as if it was written by his brother-in-law. It addresses weird stuff like the tone of voice he and his wife used to speak to each other. I dunno, maybe it's just me.