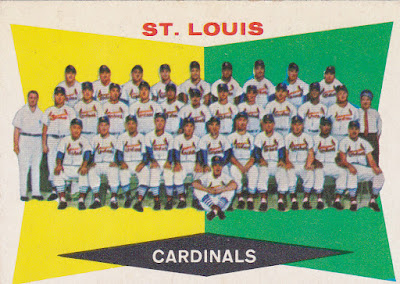 The 1960 Cardinals finished third in the NL behind the Pirates. They were in the second division (now, there's a term that dates me) for the first half of the season and then climbed as high as second, three games back, on August 12. That was the middle of a four-game series in Pittsburgh in which they'd won the first two. Then the Bucs came back to win the next two and the Cards dropped back, never to be that close again.

They were led by Ken Boyer who was more-or-less a one-man wrecking crew. He led the team in almost all offensive categories. Many by a significant margin. He was even third on the team in steals.

This was before Bob Gibson became Bob Gibson and the Cards' staff was anchored by 18-game winner Larry Jackson. Ernie Broglio won 21 games while appearing in 52, starting 24 and relieving in the rest. It was a different game back then. Lindy McDaniel was the team's closer. 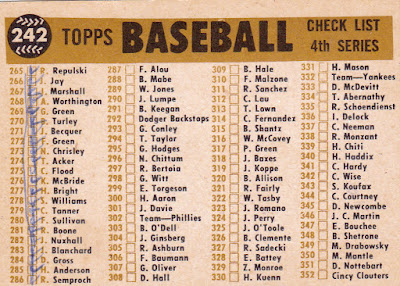 From my 5 Tool blog: Solly was in the second of three years (2.5 actually) as Cardinals' manager. A long time Cardinal, he had returned to St. Louis from a stint with the Phils and gave the role of player/manager a shot in 1959. He didn't play much, just getting 26 at-bats, but after finishing in 7th place he came back in 1960 solely as the skipper. His team finished third. He was let go as manager mid-way through 1961 with the Cards in fifth.

In his 1960 card, he props himself on the railing and gazes off into the middle distance. He's probably hoping Stan Musial will play a few more years. 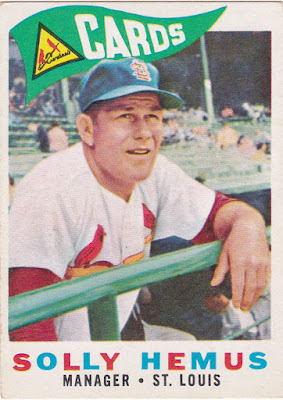 Topps with the nice cartoon back as usual. Hemus is yelling at himself in his previous player-manager role. Clever. 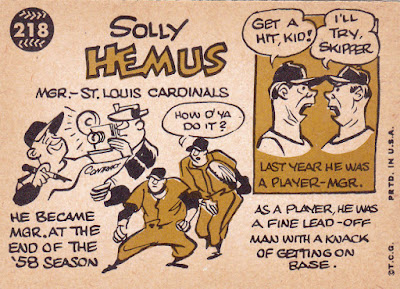 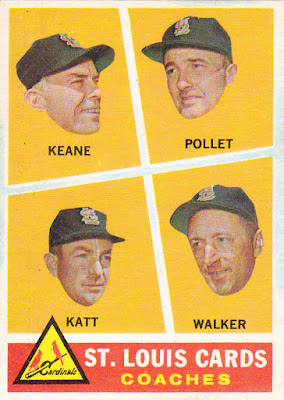 Howie Pollet was the ace of the '46 Cardinals World Series-winning club. He also won a ring as the pitching coach for the '64 Cards. Harry Walker was the 1947 NL batting champ. He played for eleven seasons in the NL for the cards and three other clubs. He had managed the Cards for part of the 1955 season prior to being on the staff for this card. He later managed the Pirates and Astros as well as serving as UAB's first head baseball coach.

Johnny Keane never played in the majors thanks in no small part to a serious head injury he suffered as a player in the Cards' chain in 1935. He was on the club's staff as a coach beginning in 1959 and took over as manager midway through 1961. He put together back-to-back 93-win seasons on 1963/64, culminating in a World Series title. For that, he was shown the door but landed in New York as the Yankees manager. He was replacing his Series opposite, Yogi Berra, who was similarly fired after a pennant.

Ray Katt was a backup catcher for the cards and Giants throughout the 1950s. Despite what the card blub claims, Katt played in 15 games in 1959. He was a player/coach in that final year. Katt, a Texas native, went back to Texas in the early 60s and coached high school ball then became an acclaimed college coach over 22 years at Texas Lutheran. 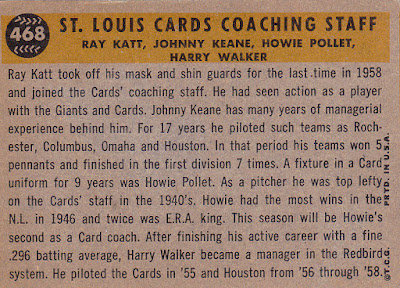