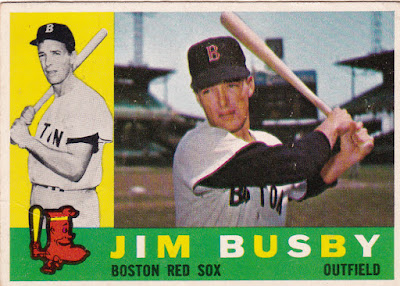 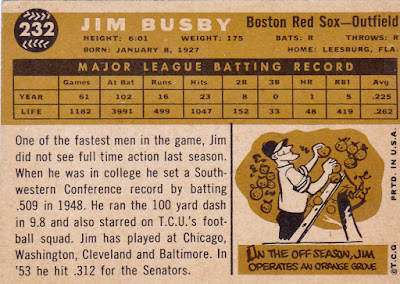 Career: A multi-sport star at TCU, Jim Busby brokered his speed and decent-enough hitting ability into a 13-season career, mostly in the AL. He had runs with the White Sox (twice), the Senators, Indians, Red Sox and Orioles (twice) in the junior circuit. He capped that with a short run with the Colt 45s in their inaugural 1962 season. Busby covered a lot of outfield ground and led the AL in several defensive categories on multiple occasions.

He made the 1951 All-Star team with the White Sox and was fifth in the AL in hitting in '52 with a .312 average. He was a top ten base stealer for four seasons.

As his playing career wound down he served as a player/coach for the Orioles and the Colt .45s before going into coaching full time. He was frequently on the staff of teams run by fellow north Texan Paul Richards.

One of Busby's sons played for a few years in the Pirates system in addition to helping his father run his citrus grove business. Jim Busby died in 1996 at the age of 69.

In 1960: Busby appeared in the Sox' home opener against the Yankees on April 19. He replaced Ted Williams in left for the top of the ninth. One week later he was released. The Orioles picked him up and he played a month for their AAA club in Miami and was called up in mid-June. He played as their fourth outfielder and a pinch-runner/defensive replacement in nearly 80 games over the rest of the season. He hit .258 in this, his second stint in Charm City.

Off The Charts: Busby's SABR bio notes his great foot speed with this..."In a college track meet he dashed 100 yards in 9.8 seconds, one-half second off the world record at the time. In the majors he was clocked from home to first base in 3.4 seconds, 3/10 of a second slower than Mickey Mantle. Busby tried to promote a match race against Mantle, but the Yankees wouldn’t allow it."