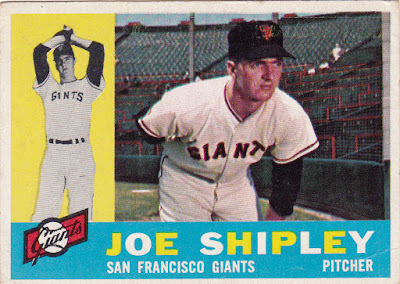 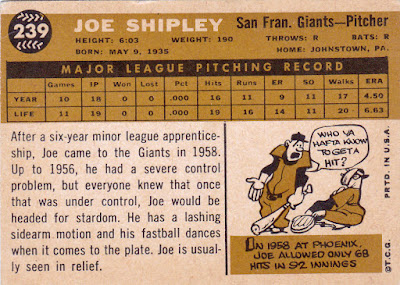 Career: Shipley had a bumpy 29 game career spread over four different seasons between 1958 and 1963. He began with the New York Giants in 1953 and spent eight years in their chain with three short looks at the majors.

Once the Giants sold him to Cleveland after the '60 season he bounced around through numerous organizations and pitched a partial season in Mexico as well. He lost his only major league decision during a brief time he had in the staff of the White Sox in 1963.

After his career ended he went back to his native Tennessee and was the baseball coach at East Tennessee State for over a decade.

His control problems on the mound were noted on the back of this card and humorously alluded to by former teammate and manager of the Giants, Felipe Alou.* This quote comes from a heavily firewalled (trust me) article on the SFGate website:

....Giants manager Felipe Alou said Giants pitcher Joe Shipley once heaved a fastball that went over the screen at Seals Stadium and clobbered a fan. "I heard he was ordered to hit somebody," says Alou. Mission accomplished. (Legend has it that as a minor-leaguer Shipley hit a batter who was in the on-deck circle.)


In 1960: He split the season (at least in terms of games) evenly between AAA Tacoma and San Francisco. He had 15 relief appearances for the Giants and although his ERA was ugly the rest of his numbers were decent, easily the best of his short career.

Off The Charts: The same SFGate article referenced above mentions that Shipley is reported to have once hit a batter...who was waiting his turn in the on-deck circle. It calls the tale a 'legend' and I can't find any mention of it anywhere else on the 'net. Or much else about Shipley either.