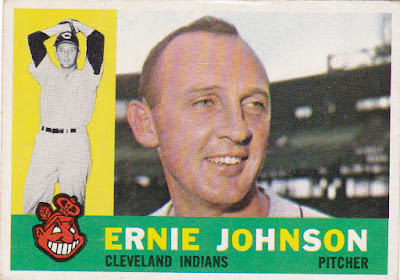 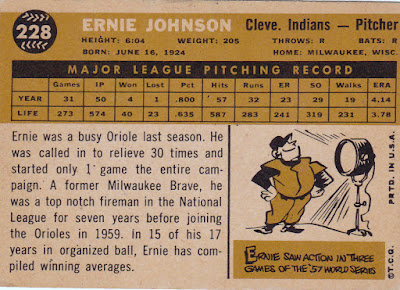 Career: Johnson was a steady and dependable reliever for the Braves through much of the 1950s. He spent a year with the Braves' lowest minor league team after signing at 18 in 1942 and then served three years in the Marines during WWII. Returning to the game in 1946, he was a starter as he moved up the ladder. He made his big league debut in 1950.

Johnson made the Braves' staff for good in 1952 and soon became a fixture in their 'pen. He pitched very well in the '57 Series win for the Braves in 1957. In three games he allowed only two hits over 7+ innings. He took the tough-luck loss in Game Six when he allowed Hank Bauer's homer as one of only two hits he gave up in 4 1/3 innings. But he got his ring.

He had his only poor season for the Braves in 1958 and was farmed out, missing the '58 Series. He was then dealt to the Orioles for what was to be his final season as a player.

In 1960: When this card was being pulled from packs in the spring of 1960 Johnson had already finished his playing career. After being dealt to the Indians the previous winter Johnson had arm issues in training camp and retired.

Off The Charts: When he retired Johnson returned to Milwaukee and got into broadcasting. He joined the Braves' broadcasting crew and stayed with the club through 1999 as part of the TBS Superstation broadcast team. His son, Ernie Jr, followed him into the booth and is well known for his duties with TBS, TNT, and CBS doing baseball and basketball.