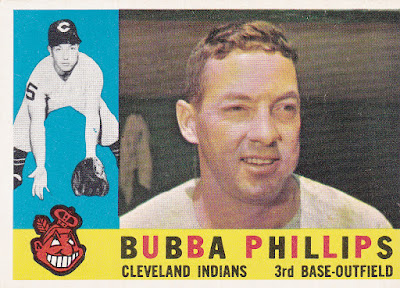 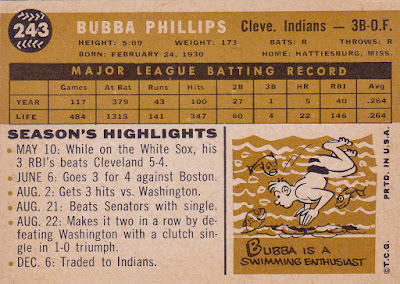 Career: Bubba Phillips was a better football than baseball player when he got to Southern Mississippi University. He'd only played softball in high school. But he became a diamond standout and he signed with the Tigers in 1948. He made the Tigers in 1955 after a minor league stretch and time in the Army. He played for the Tigers, Indians and White Sox as an outfielder and third baseman through 1964.

Phillips hit .255 for his career. He was never an all-star but got some scattered MVP votes in 1961.

In the 1959 World Series for the Sox, he played three games and went three for ten including a double.

In 1960: Despite a solid season in 1959 with the White Sox Phillips was dealt to the Indians as part of the trade that brought Minnie Minoso back to Chicago. Phillips went on to have the worst season of his career, hitting only .207 and losing his full-time job at third. But as noted, he bounced back with a nice season in 1961.

Off The Chart: Phillips had one small movie role, playing Coach Hardy for a 1981 biopic on Satchel Paige. The film, Don’t Look Back, starred Louis Gossett Jr. as Paige.

The Card: Fun cartoon of Bubba swimming with the fishes.