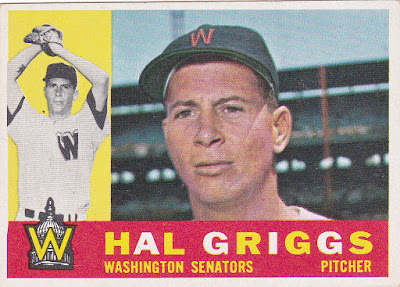 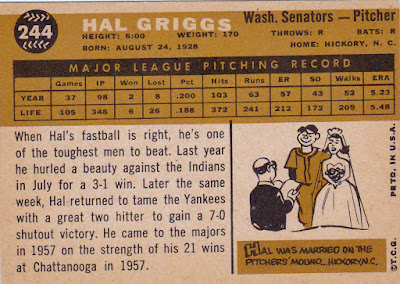 Career: Hal Griggs pitched three full seasons in the majors, all with Washington. He began in the low minors in 1952 after a tryout with Hickory of the NC State League. His numbers were not good but he impressed with his 'live' arm. He was sold to the Senators and progressed up their chain and put together some fine minor league seasons. He made the '56 Senators without having pitched at the AAA level.

Griggs spent the majority of four-year tenure (spent most of 1957 in the minors) splitting time between the bullpen and a starter's role. After his days with the Nats he spent about four more years pitching winter ball and in the minors for a couple of organizations. He retired after the '63 season. He then turned to golf.

In 1960: Griggs was done with the majors, his last appearance coming the previous September on the final weekend of the '59 season. He split 1960 between three different minor league teams, at three different levels, for two organizations (Nats and Phils). His numbers were not particularly good with any of them.

Off The Charts: His given name is Harold Lloyd Griggs. Yes, he is named for the famous silent film star Harold Lloyd.

SABR sez: At the 23rd Annual National Baseball Players’ Golf Tournament, held at Miami Springs Golf Course, Griggs competed against big-league talent including Sandy Koufax, Duke Snider, and Maury Wills. The erstwhile Senator was only a shot off the lead after day one of the two-day February 1963 event. He finished with a respectable 36-hole 160, 12 shots behind tourney winner Virgil Trucks.

The Card: Cartoon reference to his on-the-field wedding. His SABR bio adds to it with this:


"Before his team’s game on June 20, 1952, Hal married Betty Robinson on the pitcher’s mound in Hickory. Regarding the site chosen for his nuptials, Griggs responded, “I couldn’t hit, so there was no sense getting married at home plate.”


According to one publication, he “kept the club’s spirits high with his sense of humor.”8 Griggs’s travel roommate and fellow pitcher Russ Kemmerer concurred. “He was a fun guy to be around,” said the hurler, “A prankster.” Another Washington pitcher, Dick Hyde, described Hal as a “good easy going southern boy….[who] liked his night life.” In the dugout, the nocturnally-active Griggs proclaimed his carefree philosophy: “I’m only going to be here once on this earth, and I’m really going to live it up.”