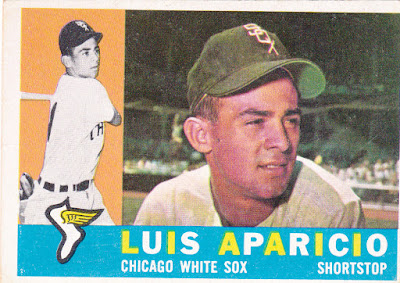 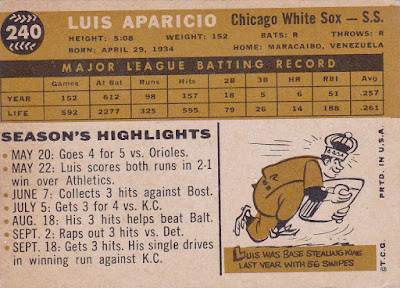 Career: Signed by the White Sox out of Venezuela in 1954 on the recommendation of fellow Venezuelan shortstop Chico Carrasquel, Luis Aparicio went on to play for 18 seasons as a shortstop for three AL clubs, the White Sox, Orioles, and Red Sox. He was the 1956 AL Rookie of the Year after leading the league in assists, putouts, and stolen bases.

He played in two World Series, facing the Dodgers both times. He was on the losing end in 1959 with the Sox but got his ring with the Orioles in 1966. He was a ten-time All-Star, won nine Gold Gloves and led the AL in steals for the first nine years of his career. Aparicio received MVP votes as a 22-year-old rookie and as a 38-year-old vet in his next-to-last season in Boston (and eight times in-between). In 1959 Aparicio was second in the MVP balloting to teammate Nellie Fox.

Aparicio was elected to the Hall of Fame in 1984. He is third on the list of games played at shortstop behind Omar Vizquel and Derek Jeter. He never appeared at another position other than shortstop.

In 1960: Coming off his near-MVP season Aparicio raised his numbers nearly across the board. His average jumped 20 points while his OPS, Slugging, and RBIs were also up. While he hit two homers as opposed to six the previous year and had eight fewer stolen bases, he again led the AL in almost every defensive category as a shortstop and he actually raised many of those stats. But his MVP share dropped to the point he was 22nd in the voting.

Off The Charts: Aparicio comes from a baseball family. His father, Luis Sr., was considered a superstar in Venezuela and has a stadium named for him in their hometown of Maracaibo. His uncle Ernesto, also a well-known player, was instrumental in teaching Luis Jr. the game.

This quote is from Aparicio's page at the Hall of Fame site:


"He's the best I've ever seen,” former White Sox owner and future Hall of Famer Bill Veeck said in 1959. “He makes plays which I know can't possibly be made, yet he makes them almost every day.”