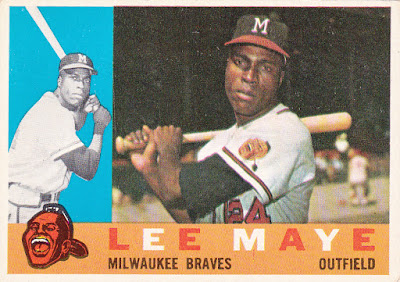 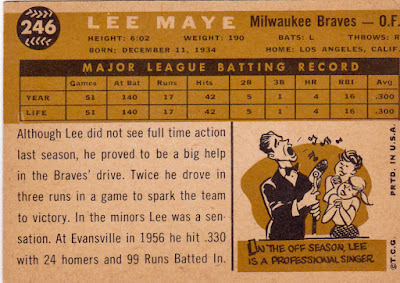 Career(s):  Lee Maye played pro baseball for 18 seasons, 13 in the majors with the Braves, Astros, Senators, White Sox, and Indians. He was never an All-Star, missed out on post-season play, and is relatively unknown despite a career .274 average and nearly a hundred homers.

He was traded to the Astros early in the 1965 season and later toured the AL before finishing with more minor-league duty and a 1972 retirement.

Running parallel to his baseball career was a music career that saw Maye make doo-wop records for several labels beginning in the mid-50s. He'd been singing since his days at Jefferson High in South Central L.A. The bulk of his music came from his time as lead singer for The Crowns. He signed his first professional contract at 19. Much more about his musical career can be found below.

In 1960: Maye was with the Braves to start the season but played sparingly through early May when he was sent to AAA Louisville. There he played well, was back in the bigs in July, and was handed an everyday spot in the Braves' outfield. He responded by hitting .301 in nearly a hundred at-bats.

Off The Charts (literally): This was one of the most fun posts I've had the pleasure to research. This is his 'rookie' card so I didn't get to dive down the rabbit hole of his music for my other set blogs. There are so many neat little items about his life that I think I'll just post some links here and let you explore if you wish.

Highly recommended is this page that has extensive photos, playlists of Maye's music, interview excerpts, and more.

Another extensive interview and background site is here. Bunches of photos, a complete(?) discography, and much more.

If you do Spotify, here is a Maye playlist.

Marv Goldberg's Rock and Roll Notebook is another fun site with a lot of stuff on Maye and his music.

This Astros Daily interview focuses on his baseball career and shows him to have been very outspoken in many ways. It's a good one.

The Card: The cartoon references his singing career. His '61, '63, '65, and '68 Topps cards also had cartoons that mentioned his 'side job'. This oldies/pop-oriented site has a great bio that focuses on his dual career and shows some of the cartoons.

The card itself is pretty cool. The blue/orange/red/white/black combo isn't unique but it is one of only six found in the 1960 set. And the Braves' sweet unis make it even more colorful. Add in that super cartoon and you have a great baseball card.

Here are a few music videos of The Crowns from YouTube: