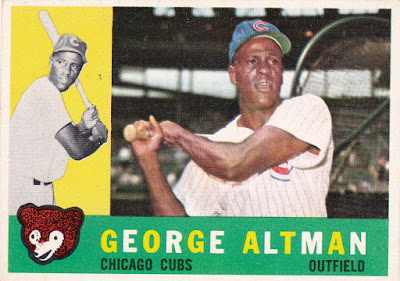 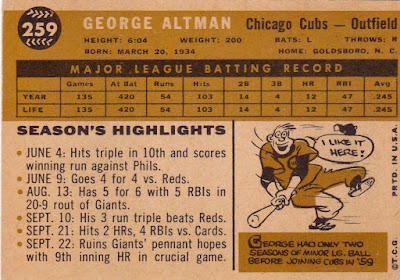 Career: George Altman is another two-sport college star who found his way to major league success. He attended Tennessee State (then Tennessee A&I) to play basketball and did so for four seasons. Tenn A&I didn't begin their baseball program until Altman's junior year but he signed up and excelled. Altman reports (in this really nice interview) that the school played a very limited baseball schedule but it did include games against Army base teams and Negro League clubs.

He gravitated to baseball over hoops (he wasn't drafted by the NBA) and when he graduated he was recruited to join the Kansas City Monarchs where he spent the summer playing for Buck O'Neil's club. He played for the Monarchs in the summer of 1955 and drew interest from the Cubs. They signed him and he began a climb to the majors that took him through two minor league seasons wrapped around two with the US Army.

Altman made the Cubs team in 1959 and nailed down a starting outfield slot. His numbers over his first couple of seasons were hampered by nagging illnesses and injuries. He found his footing and had his most productive years in 1961 and '62. He was an All-Star both years. That was no small feat considering the NL outfield talent at the time and the fact that with Ernie Banks on the club so there wasn't any 'every team has to be represented' bias in his selection. He hit over .300 both years and contributed with speed and plenty of extra-base hits.

Rather surprisingly he was traded to the Cardinals for the '63 season. The Cards had wanted him to take advantage of the short rightfield fence in old Busch Stadium. His season was disappointing and he was then traded again, this time to the Mets. The year, 1964, was his last as a starter in the majors. He was dealt back to the Cubs where he platooned for a few years and spent most of 1967 in the minors.

He has a very successful career playing in Japan that ended with a bout with colon cancer in 1975 (he beat it). He then returned to Chicago and began a second career as a commodities broker. Altman has maintained his health and was the keynote speaker at SABR's 19th annual Jerry Malloy Negro Leagues Conference in 2016. He and his wife are active in charitable and youth-oriented programs in the Chicago area.

In 1960:  He didn't quite get into as many games as he had in his rookie season of 1959. This was due in large measure to the Cubs adding Richie Ashburn to the outfield mix. Altman started games at all three OF spots and some at first as well. His numbers across the board were better this year than the previous one. He hit .266 with 13 homers and drove in 51 runs. But he was still a season away from his All-Star days.

Off The Charts: Wikipedia sums up his career in Japan this way:

He was a spare outfielder in both 1965 and 1966, and then, in 1967, he spent part of the year at Triple-A, where at age 34 he played regularly and regained his batting stroke. It served him well the following season, when he began his career in Japanese baseball. He played from 1968 through 1975 for the Lotte Orions and the Hanshin Tigers, and enjoyed seasons of 39, 34 and 30 homers—and four more years with 20 or more blasts—and batted over .300 six times. Highlights from his NPB career included leading the Pacific League in hits (170), runs (84), and RBI (100) in 1968; and being named to the "Best Nine" Pacific League team in 1968, 1970, and 1971. He credited martial arts training for baseball success in Japan.

Altman is a pretty remarkable guy. Interesting and outspoken in many areas. His SABR bio is recommended as the interview linked above. Warning...if you are an Ernie Banks fan you may want to skip that linked interview. Just sayin'

Here is Altman at the Malloy SABR Conference in '16 and a shot from his days in Japan: 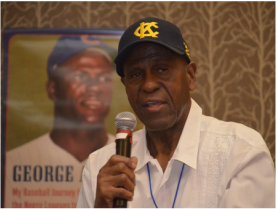 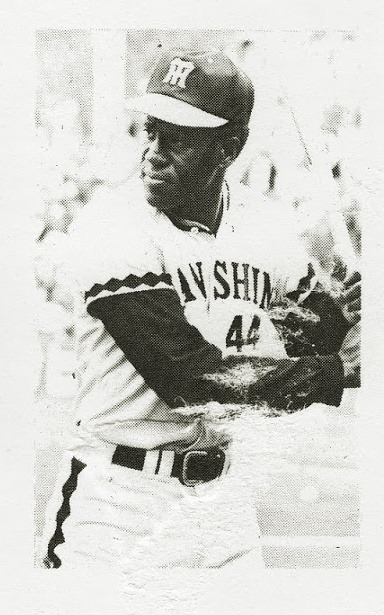 The Card: I like seeing some of Wrigley behind him. You usually get pics with the walls or scoreboard in the background but here you see a piece of the cage and the stands to the third base side of home plate. When we visited there in 2013 that's where we sat.

And his pose is more interesting than the standard headshot. This exact color combo is used on four Cubs' cards. The Cubs have eleven different combos across the set which is the most of any team. The most frequent combo for them is nearly the same but with white letters for the team and position. That one is used on seven cards and that total is the lowest 'most frequent combo' of any of the 16 clubs. Now you know.
Posted by Commishbob at 7:00 AM