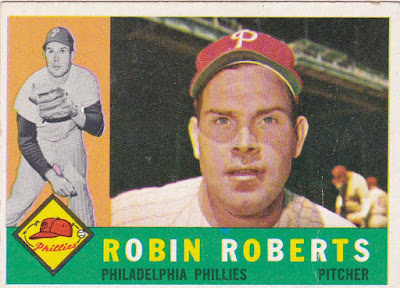 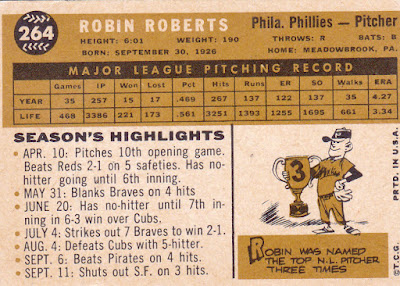 Career: Hall of Famer Robin Roberts was an Illinois native (and Michigan State alum) who won 286 games while pitching for mostly mediocre ballclubs. He had a brief but highly successful taste of the minors in 1948 and then was called up to the Phils. He quickly became one of the best right-handers in the game. He pitched a ridiculous 305 complete games. Between 1950 and 1956 he averaged 22 wins and 26 complete games a season. LOL

After his time in Philadelphia, just as it began to look like all the innings had degraded his arm, he found his way to Baltimore in 1962 where he had a resurgence and he pitched very well as a mid-rotation starter for the better part of three years. He finished up with some time with the Astros and Cubs. He was inducted into the Hall in 1976 after four election cycles.


In 1960: This was Roberts' last relatively effective year in Philadelphia. His ERA was just over 4 and he went 12-16. He allowed the most homers among NL pitchers (although that wasn't unusual for Roberts).

Off The Charts:  Roberts made one start in the 1950 World Series against the Yankees. He pitched a complete game in Game Two and took the 2-1 loss against Allie Reynolds.

Roberts worked a season in the Phils' radio booth after he retired and then became the head baseball coach at the University of South Florida. He had diverse interests both during and after his career. He was involved in the Players Association for many years. Roberts owned a seafood company and played basketball during his offseasons with a team of other ballplayers.

The Card: Roberts had 221 wins, was a seven-time All-Star, had led the league in wins and strikeouts several times when 1959 had ended. Yet, he didn't rate a 'star' number on the checklist? I don't get it.
Posted by Commishbob at 6:30 AM