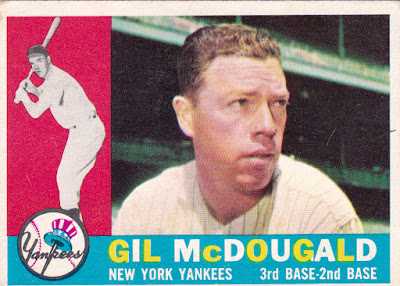 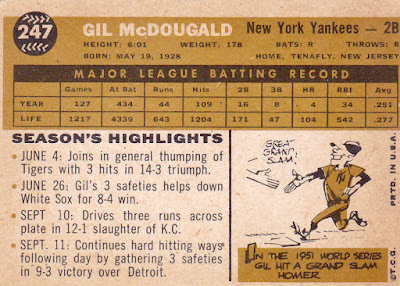 Career: After three red-hot minor-league seasons McDougald made the '51 Yanks starting at third and some at second, and proceeded to win the Rookie of the Year award.

He went on to play ten seasons in the Bronx, hit .276 with decent power for an infielder (he moved to short and then second before returning to third), was a five-time All-Star, and had several Top Ten MVP totals.

The 50s Yankees being what they were, McDougald played in eight World Series, winning five rings. He didn't hit particularly well in the post-season as far as average goes, but he homered in the first four he participated in and had two dingers (and a .321 average) in the '58 Classic against the Braves.

McDougald turned down an offer to play for the expansion Angels in 1961 to go into retirement. He scouted for the Yanks for some years and lived his last years on the middle Jersey Shore, passing away at 82.

In 1960: This was the end of the trail for McDougald. He played the fewest games and had the fewest at-bats of his career but he still played in nearly 120 games alternating and third and second with Clete Boyer and Bobby Richardson. Casey Stengel was pulling a boat-load of strings between naps. His numbers were actually as good or better than his previous season in fewer at-bats. You could look it up! 😉

His last big-league appearance came in Game Seven of the 1960 World Series. He entered the game in the top of the ninth as a pinch-runner for Dale Long who had singled a couple of batters earlier and had advanced to third on Mantle's hit. (Why Casey waited to put a runner in for Long until he'd been advanced to third is beyond me. I was watching but I'm sure it went over my 8-year-old head. Anyone?) Anyway, McDougald came home on Yogi Berra's grounder and that run tied up the game at 9-9 and set up what happened in the bottom of that crazy inning. McDougald, btw, had gone in to play third so he had a decent view of Maz' homer sailing over his left shoulder and into history.

Off The Charts: I'm generally not a fan of the Bleacher Report site but the link to this came up in my McDougald search and I thought it was interesting.


In Aug. 1955, Bob Cerv, who had almost as much power as Mickey Mantle, hit a line drive during batting practice. McDougald, who was otherwise engaged, was standing near second base when the liner struck him in the ear. It eventually cost him his hearing.
McDougald kept his deafness a secret until 1994 when he revealed it to Ira Berkow of the New York Times. A group of physicians read the article and told McDougald that a cochlear implant might restore his hearing. It did.

The Card: Another mystery is why McDougald is pictured capless. It not like he just came over to the Yanks from another club.
Posted by Commishbob at 8:30 AM