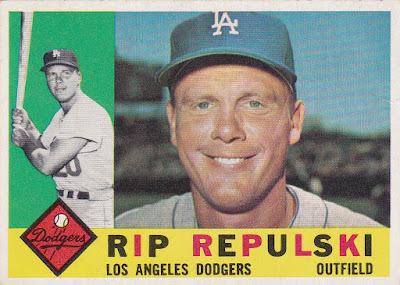 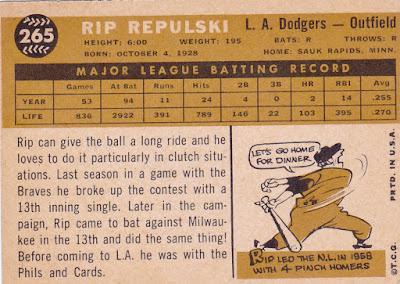 Career: Eldon 'Rip' Repulski was signed by the Cardinals after a top-notch career as a baseball and football player at his Minnesota high school and St. Cloud State University. He spent six seasons moving up the Cards' chain. That wasn't unusual given the depth of talent some franchises held in those days.

Repulski made the St. Louis roster in 1953 and laid claim to the starting centerfield job. He had a solid season and got some Rookie of the Year consideration. He played four seasons for the Redbirds and hit .276 over that span. He had a reputation as a good defensive player, too. He made his only All-Star squad in 1956 and them was promptly traded to the Phils after the season.

In Philly, Ripulski hit 20 homers in 1957 but had a sub-par '58 and was traded again, this time to the Dodgers. His days as a regular were over and Repulski spent a couple of seasons in both LA and Boston coming off the bench as a pinch-hitter and spare outfield glove. The Sox released him mid-year in '61 and he caught on with the Twins AAA club. He retired after that and returned to his hometown to operate his bar.

In 1960: In May, after just a handful of at-bats with the Dodgers, Repulski was traded to the Red Sox. He hit .243 as their primary right-handed pinch-hitter and occasional starter in left. BTW... Repulski hit a grand slam at Fenway Park in his first American League at-bat. He hit it in the bottom of the eighth on May 10 against the White Sox. Ted Williams had drawn an intentional walk to load 'em up for Repulski who was batting for Gary Geiger who'd been announced as a pinch hitter before a pitching change by Chicago. His blast broke open a 5-5 game. The Red Sox hung on for a 9-7 win.

Off The Charts: Rip drew an intentional walk in his only at-bat in the 1959 World Series. In the bottom of the eighth inning of Game Five, after Ron Fairly was announced as a pinch-hitter for Don Demeter with Chicago up 1-0, the Sox countered by bringing Billy Pierce in from the bullpen. Repulski was then sent in for Fairly and drew his pass. Dick Donavan relieved Pierce and got out of the inning. The Dodgers would have to wait until Game Six in Chicago to wrap up the title.

According to his SABR bio, Repulski owned and operated a bar in St. Cloud, Minnesota, not far from where he was raised and where he went to college. A couple of paragraphs pretty much sum up his persona:

Repulski was a “hands-on” owner of his liquor establishment, frequently coming out from behind the bar to share tales of his baseball career with anyone who might have even a dim connection with the sport.


Never one to allow anything to get in the way of a good story, Rip regaled his audiences with tales of his ball-field exploits: how he escaped death in plane and bus crashes, that he could still hit left-handed pitching, that the Cardinals kept him in the minors too long, and that his lifetime batting average was the same as Yogi Berra’s (it wasn’t). The stories went on and on until closing time.


Rip did a VW Wagon commercial. No date available for this. Clever stuff.