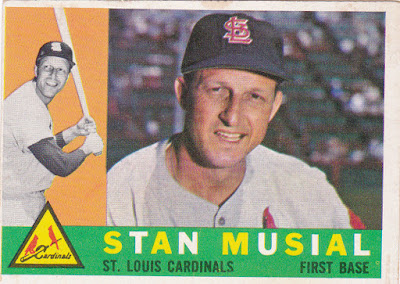 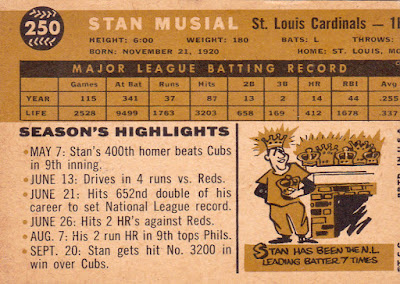 
In 1960: Musial hit .275, sixty below his career average but twenty points better than he hit the previous year. His 387 plate appearances were the lowest of his career, and age had sapped some of his power as he totaled 17 homers. But anyone who thought he was done was mistaken.

He was an All-Star, and while he wasn't in the starting lineup for either game, he got a pinch-hitting shot in both. The results? A single in the Jully 11 game, and a homer in the on on the 13th.

Off The Charts: Stan's brother, Ed Musial, played four seasons of minor league ball between 1946 and 1950. He was, at least for part of that, in the Cubs' chain.

Some quotes from the Donora Pa. native's BullPen Wiki page at Baseball-Reference:

"I could always hit. It's not something I ever had to think too much about. A lot of guys are very scientific about it. It just seemed to come naturally, even when I was growing up." - Musial

"How good was Stan Musial? He was good enough to take your breath away." - Vin Scully


The Card: This combo (orange/green/yellow/white/black) seems to work well with some photos and not with others. It's standard for the Tigers and shows up 18 times in the set.

I like the cartoon here. It references The Man's seven batting crowns.

The photo, though, is a bit of a mystery. That's Seals Stadium in San Francisco, one of the more common photo locales for NLers in the '60 Topps set. That nails down the years of the pic to 1958 or 1959. What is strange is that there looks to be some sort of patch(?) on Musial's left sleeve.

St. Louis hadn't worn the 'script-front/bird sleeve patch' jerseys since the one year run in 1956. From the Hall of Fame's Uniform database:

So what's that on Stan's sleeve? That same Hall site has a listing of all memorial sleeve patches. Nothing noted for the Cards in that timeframe.

Looking closer at that section of the cards shows that there is something red on his sleeve. And that is the head of a 'Bird on a Bat' on his chest. (Hard to see on the card in hand). 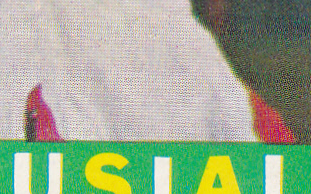 So, I don't know what to think. Stray ink blob? Bloodstain? The card isn't obviously airbrushed or otherwise altered so that possibility is pretty remote. Plus, Topps did plenty of  'editing' on the b&w 'action' pics but next to nothing on the color, main photos. I don't know the answer and nobody else cares so it'll remain one of life's little mysteries.

Also noteworthy is that Seasons Highlights section that contains, not just big game production, but some super career milestones for Musial...400 dingers, 3200 hits, and the then-record 652 doubles. He finished with 725, 21 behind Pete Rose for the NL lead, and third all-time behind Rose and Tris Speaker's 792.
Posted by Commishbob at 7:00 AM