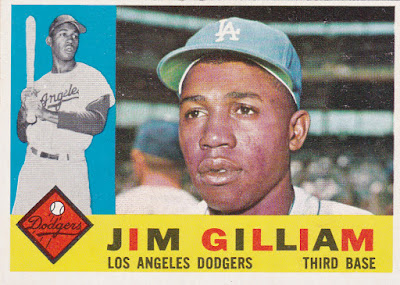 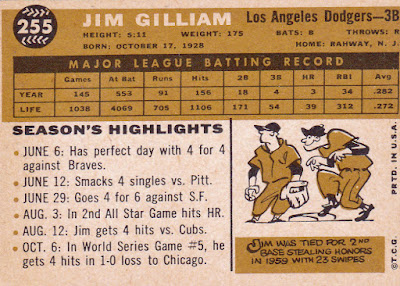 Career: Jim 'Junior' Gilliam was a baseball junkie from his youngest days. He left school at 14 to play ball for some semi-pro clubs around his native Nashville, Tennessee. He soon found himself signed and playing for the Baltimore Elite Giants of the Negro National League. It was there that veteran George Scales got him into switch-hitting, a tool that helped make him so valuable in later years.

Gilliam signed with Brooklyn in 1951 after four years with the Elite Giants and he reported to the AAA Montreal Royals. Wikipedia reports that he wasn't sent to the AA Ft. Worth Cats because black players were not welcome in the Texas League. No mention of that in Gilliam's SABR bio which is usually pretty thorough. SABR does, however, tell us that Gilliam was 'loaned' to the Cubs organization in 1950 by the Elite Giants on a conditional deal but the Cubs were not impressed enough to sign him. His Baseball-Reference stats don't show and numbers with either of the Cubs' farm teams mentioned so perhaps it was a winter ball sort of thing.

But, anyway, Gilliam had solid two minor league seasons in Montreal and made his major league debut with the Dodgers in 1953. He made a real splash in Brooklyn and won the NL Rookie of the Year Award easily over Harvey Haddix of the Cardinals. He was an iron man, playing second, left, and right and rarely missing a game it seems. He had over 700 plate appearances, a plateau that he reached several times both in the majors and minors. He also led the NL in triples.

Gilliam played his entire fourteen-year career with the Dodgers. Many years he rotated through the starting nine, playing second, third, and two or all three outfield slots.

He was a part of seven World Series clubs and took home four rings. His Series average was only .211 but he hit two homers in his first, the 1953 Series against the Yankees. He was a two-time All-Star and homered in front of the hometown Los Angeles crowd in the second ASG in 1959.

Gilliam coached for the Dodgers after he finally retired (he had been a player/coach at the end). He had hoped to become a manager (there had, of course, been no black managers in the majors at that point) but the opportunity never came his way. He stayed with the Dodgers as a coach until he passed away in 1978.


In 1960: His .248 average was the lowest of his career to that point but his OBP remained fairly high due to his ability to draw walks. His other numbers, RBI,  runs, extra-base hits, etc. remained on a par with his previous few seasons.

Off The Charts: Gilliam was named the Dodgers' first base coach in 1965 as his skills were on the decline. But struggles by his intended replacement at third, John Kennedy, inspired the Dodgers to push Gilliam back to full-time playing status. He responded with a .280 season and a key defensive play in the '65 Series. SABR relates this story of the meeting where he was asked to return to the field...

Buzzie Bavasi called a meeting of the front office and dugout management. According to Bavasi: “We talked over several possibilities… Finally, I said, ‘Let’s reactivate Old Slowfoot.’ Gilliam, attending the meeting as a coach, looked at me out of the corner of his eye. We were playing the Cardinals that night. He said, ‘You picked a fine day to bring me back. We’re going against [Bob] Gibson tonight. Wait until tomorrow.’”


Here are a few quotes from the same SABR bio:

“Junior played to win ballgames,” Fairly said. “He didn’t care who was the player who won the game so long as the Dodgers won the game. Jim didn’t worry about personal things like that.”

The difficult to please and proud of it coach Leo Durocher, said of him, “He never – and I mean never – misses a sign. He does everything right. He’s a double pro.”

Added Gilliam’s long-time skipper, Walter Alston: “He doesn’t make any mistakes…He gives you 100 percent, day in and day out. He never moans. He’s a good team man. If I had eight like him, I wouldn’t have to give a single sign.”

The Card: Nice shot of Gilliam at the Polo Grounds. This color combo (blue/yellow/black/red/black) is the most common one in the '60 set. It appears 50 times and is the 'standard (most used) for the Indians, Braves, and Dodgers.