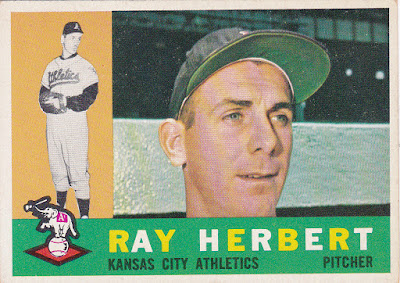 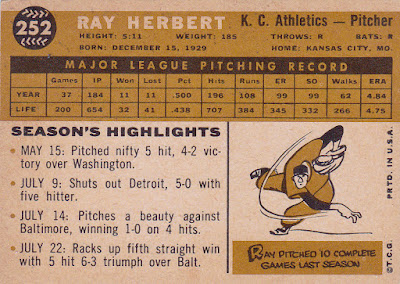 Career: Herbert's career, which began in the Tigers' chain in 1949, was a series of peaks and valleys. Starting at the AAA level, he had a terrible first year. But the Tigers must have seen potential because he remained at the top rung of the ladder and was more impressive at Toledo his second time around.

Herbert earned a spot on the Tigers' staff and sandwiched three and a third seasons around nearly two years spent with Uncle Sam. His record in Detroit, where he was mostly a mop-up reliever, ranged from 'not bad' to terrible. He was traded to the Athletics in May of 1955 and spent the rest of that season pitching batting practice (in real games to opponents). Two years of seasoning in the minors transformed Herbert into a much better pitcher. He grabbed the role of a starter and won 36 games for the A's. He had enough value to be a key part of a deal that sent him to the White Sox in June of 1961.

Hebert's best years came on the South Side. He won 20 in 1962, made the All-Star team (he pitched three innings and got the win in the second of that years' ASGs), and even got a look from MVP voters. After a 13-win '63 season and a 6-win 1964 (diminishing returns), he was dealt to the Phils. There he had decent numbers as a starter one year, not-so-good as a reliever the next and retired after being released in December of 1966.


In 1960: Herbert had a really good season with a 3.28 ERA and a 14-15 record on a team that finished last and 38 games below .500.  It's not surprising that he was dealt off the next year. What IS surprising is that it was to the White Sox and not the Yankees.

Off The Charts: His SABR bio tells us about his post-playing days...


"Herbert and his family continued to live in the Detroit area. Herbert had been employed by Montgomery Ward as a sporting goods department manager during the offseason, and now this became his full-time occupation. Herbert continued to be involved with baseball, working as batting practice pitcher for the Tigers from 1967 to 1992 when the team was at home. He was also president of the Detroit Tigers Alumni Association. The Tigers appreciated Herbert enough to include him with their traveling group for playoff games, and for the World Series in 1968 and 1984."


Since he's from the upper Midwest and not Louisiana I'm assuming we were correct as kids when we called him Ray "Her-burt". Now that I'm in Texas and near Cajun country, I slip into thinking it's 'ā-bear". Thought you should know.

The Card: I don't hate headshot cards as much as some do but this just isn't a good one. Cropping it differently, maybe showing more uni, would have made a difference. I always like that Athletics' logo though.