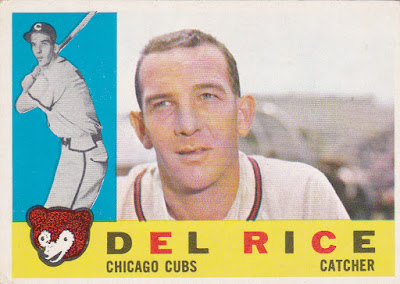 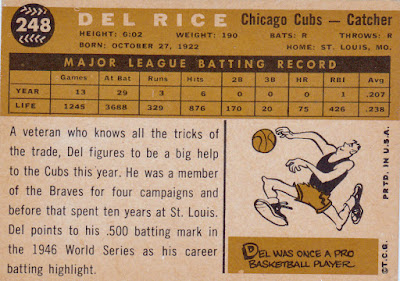 Career: Rice joined the Cardinals in 1945 after four seasons in the minors and spent half a decade as a platoon/semi-regular catcher. In 1950 he claimed their fulltime job behind the plate and held it four seasons. He was Roy Campanella's backup in the 1953 All-Star Game but Campy played all nine innings.

Rice was dealt to the Braves in 1955 and spent five seasons there riding the pine behind Del Crandall. Then he toured both leagues, playing with the Cubs, Cardinals (again), Orioles, and the expansion Angels in 1961, his last stop in the bigs.

In the end, Rice had fashioned a 17 season career, largely due to his defensive skills.

He played in two World Series and was on the winning side both times. While earning rings in '46 and '57, he went four for twelve in five total games. He was a member of the NL champion Braves in 1958 but didn't get into a game in that Series.

After retiring as a player he worked as a coach and minor league manager for many years, primarily with the Angels' organization. He had one year as the Angels manager, 1872, but the team finished fifth and Rice was given a scouting job and replaced in the dugout by Bobby Winkles. He later scouted for the Yanks and Giants.

Off The Charts: Rice is credited as being the very first Los Angeles Angel. He signed with Gene Autry as a player/coach on December 12, 1960. The expansion draft that filled their roster was held two days later.