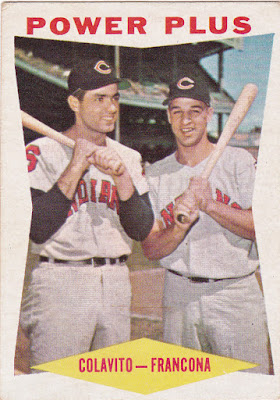 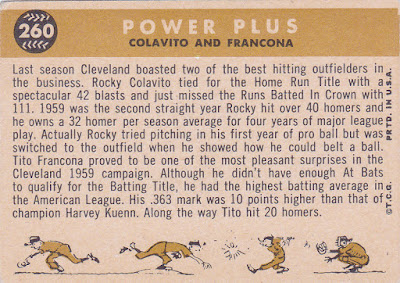 The happy couple posed at Yankee Stadium for this Topps Special.

This card was probably a painful one for Cleveland fans in 1960. In April, on the eve of Opening Day, Rocky Colavito, the 1959 AL home run champ and an immensely popular figure in the city, was traded to the Tigers for the defending AL batting champ Harvey Kuenn.

Cleveland.com has the story (as do about 500 other online sites). The deal was huge at the time. Even I remember the stir it caused in baseball.

Colavito's 1960 season in Detroit wasn't up to par for him but he bounced back in a big way in 1961. Meanwhile, Kuenn hit .308 for the Indians. That was well off his .353 of 1959 but he did make the All-Star team. What I hadn't realized until I was doing some poking around for this post was the season opener for both teams...yup, you guessed it...was the Indians in Tiger Stadium. I bet that was a fun day for Frank Lane.

On a side note...Francona was flirting with .400 through most of the summer of 1959. He'd forced his way into the Indians' lineup with a super hot bat. His average, as the card back notes, was 10 points higher than Kuenn's but he lacked having quite enough at-bats to qualify for the batting crown.