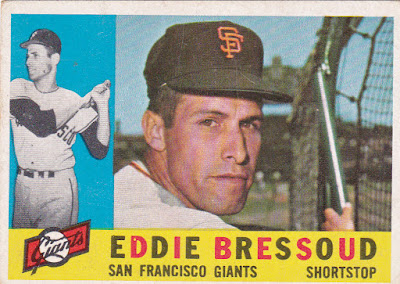 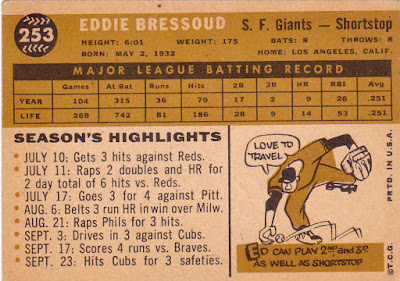 Career: Bressoud, a Los Angeles product, played twelve seasons in the majors, mostly with the Giants and Red Sox. He signed in 1950, played a few years in their system, did two years in the military, returned to the minors, and then broke through to the Giants in 1956. During the club's last two seasons in New York Bressoud was up and down between the Polo Grounds and AAA. He had a reputation as a versatile infielder with a good glove anywhere he was stationed.

But he wasn't an automatic out at the plate, either. At least in most years. In 1964 for the Red Sox he hit .293 and made the AL All-Star team. His career average was .252 which is better than a lot of the infielders of the era.

Bressouud had a couple of seasons with the Giants in which he was a near-everyday player. But when he reached the Red Sox in 1962 he took over as their shortstop and had a nice three-year run. He had good power for a middle infielder and put up double-digit homers for several seasons in a row. His numbers fell off in 1965 and he found himself with the Mets in 1966 where he enjoyed one final season as a starter, and with the Cards in 1967 where he was a spare part.

Bressoud worked as a minor league manager and scout once his playing days were done.

In 1960: This was his second year as the Giants' starter at short (he got into 116 games with over 430 plate appearances) but he didn't hit well enough to hold the job. His .225 average was the lowest of his career. He'd soon give way to Jose Pagan at short for the Giants.

Off The Charts: Bressoud's move from San Francisco to Boston came with a detour. He was taken by Houston in the December '61 expansion draft and then traded to the Sox for Don Buddin. SABR has this to say about the deal:


Bressoud never played for Houston. In fact, he was earmarked for the Boston Red Sox even before the Colt .45s drafted him. In discussions during the World Series, Mike Higgins of the Red Sox talked with GM Paul Richards of Houston. The Sox had tried to obtain Bressoud from the Giants, but failed, and so a deal was struck whereby Houston would draft Bressoud and then swap him to the Red Sox for Boston shortstop Don Buddin. Buddin was no fan favorite in Boston, and Higgins was looking for someone steadier in the field. Columnist Dan Daniel quoted an unnamed Boston writer: “Mike Higgins would not have dared to open the 1962 season with Buddin still on his club. The fans hooted Don all last summer.”


The Card: See, this is what a good headshot looks like. Shows him leaning on the cage, Wrigley scoreboard, and players in the background. Nice colors as well. Good effort by the Topps crew here.
Posted by Commishbob at 6:30 AM