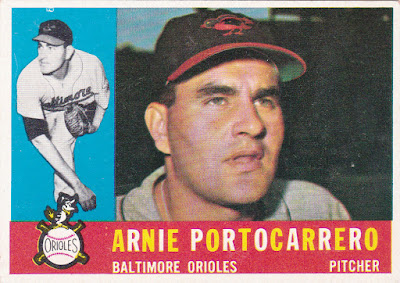 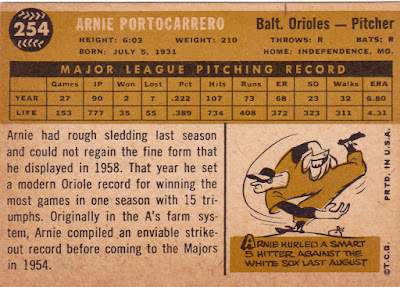 Career: A New York native of Puerto Rican descent, Arnie Portocarrero was signed by the Philadelphia Athletics in 1950 after a very successful high school career. He spent two seasons in the low minors, two years at my favorite Army base, Ft. Dix in New Jersey.

When he returned to the A's he jumped into the starting rotation and became the ace, at least for a season. His nine wins led the club. Arnie wasn't as successful in '55 and when he got off to a tough start in '56 (he'd hurt his arm in winter ball) he was shipped to the minors. 1957 was a mixed bag and early in 1958, he was dealt to the Orioles. Charm City revived him for a bit and he had some nice outings there including back-to-back shutouts in May/June over the red Sox and Tigers. He finished with a 15-11 mark, the most wins on the team, and in his career.

Arnie never came close to replicating that '59 season and after a couple of seasons with the Orioles and in their farm system, he retired. He went to work for U. S. Rubber as a salesman and stayed active playing amateur baseball around Kansas City.

In 1960: This was in for Arnie. He was on the O's staff through mid-June. He got into thirteen games making five starts and pitching about 40 innings. His results weren't ugly (3-2, 4.43) but the Baby Birds staff was formed and there apparently wasn't room for a 28-year-old journeyman. He was sent down to AAA Miami and made ten starts there the rest of the way.

Off The Charts: Arnie Portocarrero made it into a few fun oddball issues in the 50s. He had two cards in the 1955/56 Rodeo Meats Athletics regional issue. There are some color variations in there as well. Plus he had a 'premium' card related to the set. Getting the straight scoop on how the premiums were distributed is difficult. In fact, everything I come across about the Rodeo sets conflicts with whatever story I read previously. 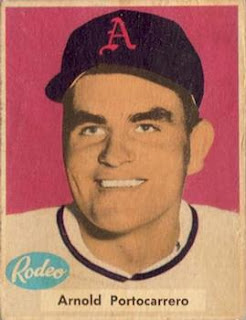 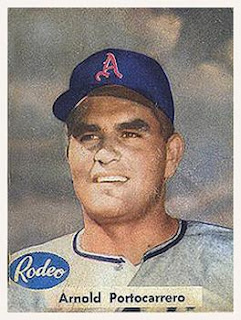 Below is a Rodeo Meats 'Premium' of Portocarrero. This is part of a set of 16(?) which were apparently not premiums in the normal hobby sense. I believe they are more along the lines of the team-issued picture packs that were a common thing back in the 50s and 60s. Sold by the team at the stadium or through the mail as a complete set. 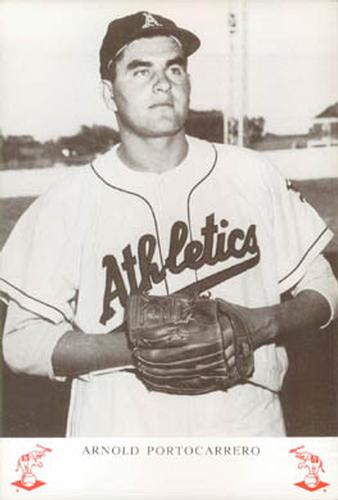 Roberts as seen with the card unfolded:

Our guy Arnie on the reverse:

Flip it and fold it and here's Arnie with feet: 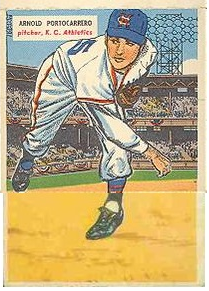