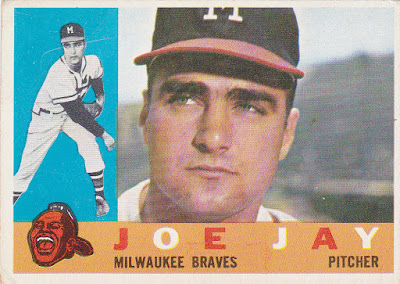 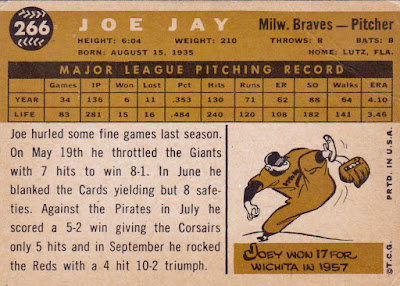 Career: Joey Jay was among the first players to sign under the 'Bonus baby' rule. That regulation forced a team who signed a youngster to a contract above a certain threshold to keep him on the major league roster for two seasons. When the Braves signed him in 1953 he spent a couple of seasons watching and waiting and has said he was ignored in the clubhouse and 'felt like the batboy'.

He was able to impress with his first start which came in the form of a shoutout in late 1953. Jay stuck with the big league club until the middle of 1955 when he was sent to the minors and he stayed there (with mixed results) until reappearing on the big league staff in 1958. He still didn't get a lot of work but he had impressive stats that year. An arm issue kept him off the World Series roster for the Braves that season. Jay's numbers regressed over the '59 and '60 seasons and he was traded to the Reds for 1961.

In Cincinnati, he found his form and won 21 games in each of his first two seasons with the Reds. He was an All-Star in 1961 and made two starts in the Series. He won Game Two with a four-hitter in Yankee Stadium that tied the Series at 1-1. He then returned in Game Five and the Yanks proved they had figured him out and Jay didn't get out of the first inning.

Jay never again approached the success he'd had in those first two seasons with the Braves. He stuck around through 1966 and even had a return engagement with the Braves when he was traded to the Atlanta version of the club midway through 1966. That was his last big league run.

He had a shot with the Phils in 1967 but he wasn't effective in a few starts with their minor league club in Clearwater and that was that. He retired to a career and a business owner (oil drilling, taxi cabs, and building cleaning and maintenance.

Off The Charts: Jay had nothing to do with baseball once he left. Here is a paragraph or so from his SABR bio:

Jay, a western Florida resident, adopted a life without baseball. He declined to attend card shows or fantasy camps and embraced a very low profile contrasted to his former public life. “I don’t live in the past, like most ballplayers,” he said. “I don’t wear my World Series rings, my mother has my scrapbooks, and if someone offered me a baseball job, I’d turn it down in a minute. When I made the break, it was clean and forever. It’s infantile to keep thinking about the game. It gets you nowhere. Most ex-ballplayers keep on living in some destructive fantasy world. Not me. I’m happier than ever since I left. And do me a favor. Don’t mention where I live.”


I don't recall ever hearing him referred to as 'Joe' Jay. It was always 'Joey'. Topps used the more formal version on this and (I think) all his cards. Other companies mixed and matched.

I'd always thought he was credited with being the first Little League World Series winner to play in the majors. Apparently, he was the first LL'er, period.