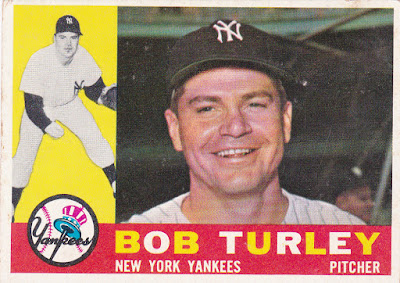 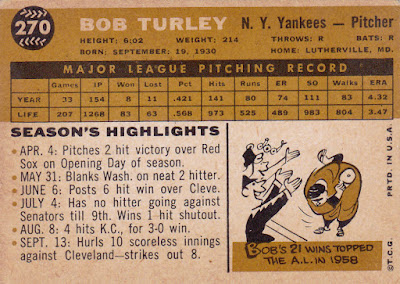 Career: 'Bullet' Bob Turley signed with the St. Louis Browns in 1948 after graduating from East St. Louis (Ill) high school. He'd been sought after by the Yankees but their scouts whiffed and signed a relative by mistake (story below).

Turley made a one game debut in 1951 and sandwiched minor league seasons around military time. He finally made the Browns for good in 1953 and moved along with them to Baltimore the following year and became the staff ace. But, as he would his whole career, Turley struggled with control. While giving up only 178 hits in 247 innings he walked 181. That led the league as did his 171 strikeouts.

The Yanks got their man for 1955 as part of a huge, complicated trade with the Orioles. Baseball-Reference has the details...

Turley put together some outstanding seasons with the Yanks and peaked in 1958 when he won the Cy Young award, led the league with 21 wins and 19 complete games (he led in walks as well), made the All-Star squad and finished second in the MVP voting. He got an MVP trophy in October with an outstanding World Series against the Braves.

In his career, Turley won two titles but his numbers fell off quickly after that '58 season and he finished his career with the Angels and Red Sox in 1963. He had great success in his post-baseball career as a financial planner/insurance and real estate mogul and he became very wealthy.

[After high school] He attended a Yankee tryout camp with his uncle, Ralph Turley, who was about two years older. Bob impressed the scouts, and one of them made a note to follow up on “R. Turley.” Looking in the phone book, he found the listing for Bob’s grandfather and asked if there was a pitcher in the family. Sure, the grandfather said, my son Ralph. “R. Turley,” check. The Yankees signed Uncle Ralph.

Turley pitched the Orioles’ home opener in 1954, the first major league game in Baltimore since 1902, following a parade that jammed the city’s streets. He struck out nine White Sox in a 3-1 victory. In his next start, he struck out 14 Cleveland Indians and carried a no-hitter into the ninth before a single and a home run beat him.

The Card: It's another really nice one. The Yankees got this color combo as their primary and it looks great. And this is another nice portrait shot and a fun cartoon. I've tried to figure out who the Yankee player is in the background who seems to be watching hitters through the batting cage. He might be Whitey Ford but we're no close enough to know for sure.

Bonus: Turley was prominent enough during his heyday to warrant a bunch of magazine covers. None of these are mine. I do remember the Sport cover. My father used to buy Sport to read on his train/bus commute to NYC. He kept them for a long time and I read and re-read them as a kid. Sport was always my favorite magazine. 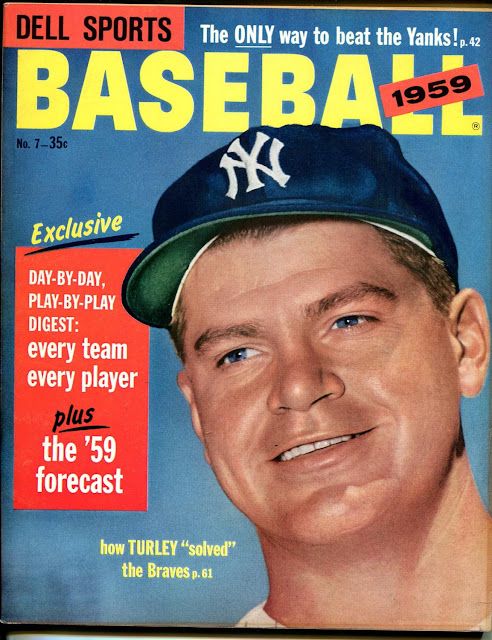 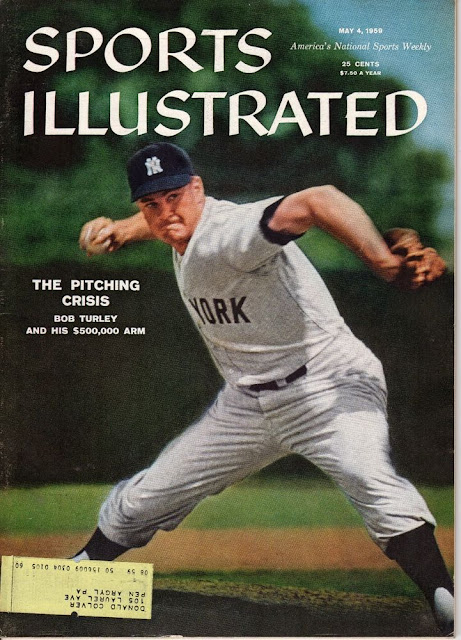