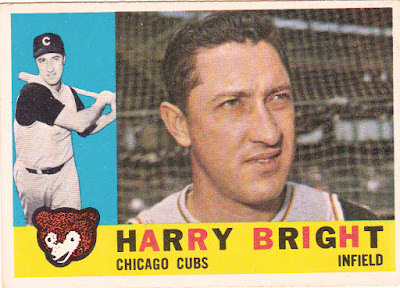 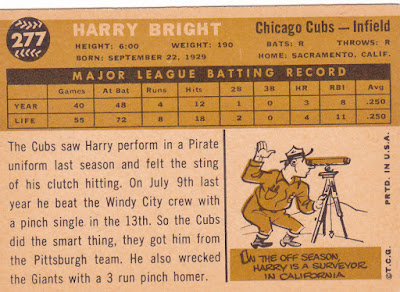 Harry Bright  Chicago Cubs
Career: Harry Bright made his pro debut in 1946 with the Twin Falls (Idaho) Cowboys of the Class C Pioneer League, where he'd been assigned after signing with the Yanks as a 16-year-old. He got his final pro at-bat in 1971 as a player/manager in the Athletics chain. That's a span of 25 years. In between he played for five big league clubs and managed many minor league teams. He stayed in minor league dugouts as late as 1985 in the Expos chain. He'd also done work as a scout and instructor.
As a player, Bright did almost everything but pitch. He had his best (and busiest) season in 1962 with the Senators when he held down the regular first base post and hit .274 in over 400 at-bats. That year he even appeared as a catcher in three games. Over eight seasons he hit .255 and got to play in the '63 Series for the Yankees.
In 1960: Bright is shown with the Cubs, and he did play for them*, but not in 1960. He was 'returned' to the Pirates on the eve of the season after having been drafted away from them the previous winter. Bright had a big minor league season for Salt lake City in the PCL (27/97/.313/.370) and made a handful of pinch-hitting appearances that September after being called up to Pittsburgh. He was not on the Pirates roster to the 1960 Series.
*=Bright got back to Chicago in 1965 and played in 27 games for the Cubbies. It would be his last big-league year.
Off The Charts: Entertaining story from his SABR bio...

[...]Harry Bright played in nearly 2,000 games. None of his exploits on the playing field, not even all of his 1,966 major and minor league hits, earned Harry Bright as much notoriety as one time at bat in the 1963 World Series.

It was the opening game of the fall classic between the New York Yankees and the Los Angeles Dodgers. Behind the pitching of Sandy Koufax, the Dodgers had take a 3-2 lead into the ninth inning at Yankee Stadium. At the end of the eighth, a note on the scoreboard said that Koufax had tied the record for the most strikeouts in a World Series game. The first two outs in the ninth were routine putouts. With only one more chance for Koufax to break the record, Bright strode to the plate to pinch-hit for pitcher Steve Hamilton. He ran the count to 2 balls and 2 strikes before swinging and missing. Koufax had his record 15th strikeout, the crowd erupted, the Dodgers won the game, and Harry Bright became a footnote in the record books. “It’s a hell of a thing,” Bright said. “I wait 17 years to get into a World Series. Then when I finally get up there, and 69,000 people are yelling—yelling for me to strike out.”

The Card: Bright poses in Wrigley Field in his Pirates vest jersey with the batting cage behind him. That's fine but what I like about the card is the cartoon that shows him in his 'off season' job as a surveyor.
Posted by Commishbob at 12:55 PM