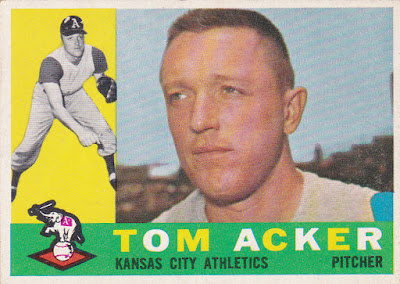 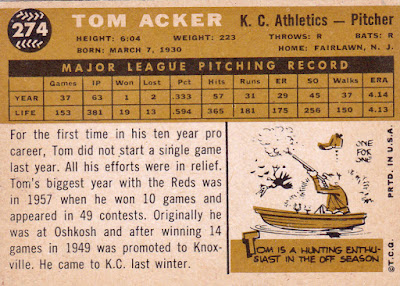 Career: Acker is another pitcher who took a long road to the bigs. He first signed with the Giants in 1948, spent two years in the employ of Uncle Sam, was dealt to the Reds and debuted with them in 1956.

Over four full seasons he went 19-13 with a 4.13 ERA, mostly as a reliever. He had some spot starts most seasons with the Reds. As the card notes he had his best season in 1957 when he won 10 games.

In 1960: Acker had been dealt to the Athletics the previous winter but be was done with the majors. He ended up pitching in a few games for the Yankees' AAA club in Richmond. He was hit hard by the look of his numbers and was out of baseball soon after.

Off The Charts: Not much info on Ackers. I did discover that his nickname was 'Shoulders'. That's more than I found when I was researching him for his 1959 card.

The Card: Whatever that blue blob is that snuck onto Acker's left shoulder is seen on every copy. Some sort of printing flaw.