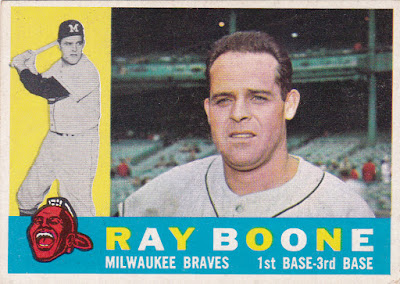 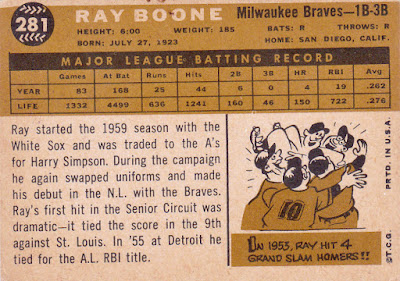 Career: Ray Boone is the patriarch of baseball's first four generation professional family*, the first family to send three generations to the All Star Game. Boone played in the majors for thirteen seasons beginning in late 1948 when he got a quick peek at Municipal Stadium in Cleveland. He played primarily for the Indians and Tigers as an infielder and was a two-time All-Star with Detroit in the mid-fifties.

Boone, a WWII vet who served nearly four years in the Navy, led the AL in RBI in 1955 and picked up MVP votes in three seasons. He was a career .275 hitter and homered off Robin Roberts in the 1954 All Star Game. After his playing days Boone was a longtime scout for the Red Sox.

In 1960: He opened the season with the Braves but was dealt to the Red Sox in May. He hit just .205 overall in 90 at-bats combined. The Sox released Boone in September and his playing days were over.

Off The Charts: Wikipedia tells us that he was a descendant of American pioneer Daniel Boone.

*=Jake Boone, Ray's great-grandson, has been drafted twice by the Nats, signed with them but has yet to play in the minors due to the cancelled season.