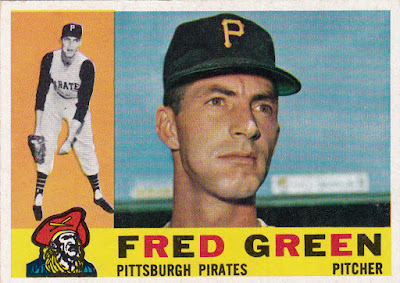 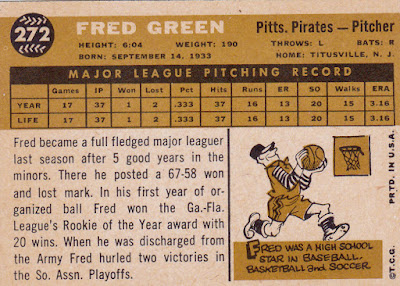 Career: Fred Green was a Jersey boy who starred in hoops, soccer, and baseball in high school and was signed by the Pirates in 1952. Green spent almost seven seasons pitching his way thru the Pittsburgh system, taking a military detour during which he, according to SABR, mostly played baseball. He debuted in 1959 as a major-leaguer and got into 17 games between his trips back and forth to the minors.

Green had (by far) his best year in 1960 as the Pirates took the Series but then was back in the minors for parts of 1961 and '62. He was claimed on waivers by the Senators and pitched in five games for them before ending his active career and turning to coaching.

In 1960: Green was the lefty pairing in Danny Murtaugh's 1-2 punch out of the bullpen. Elroy Face, the righty, served mostly as the closer and had a great year (10 wins, 24 saves) but Green contributed eight wins and his three saves were good enough to tie for second on the Bucs' staff. He had 45 appearances, more than half of his career total and posted a 3.21 ERA striking out 49 in 70 innings.

In a Series of contrasts, the victorious Pirates’ four victories were by scores of 6-4, 3-2, and 5-2, while the Yankees crushed the Bucs, 16-3, 10-0, and 12-0. Green pitched in all three of the Pirates’ losses, and was hit hard. In four innings he yielded ten runs. He gave up two home runs to Mickey Mantle, including a mammoth shot over Forbes Field’s right-center-field wall in Game Two. Although he appeared to be throwing batting practice for Yankees hitters during the World Series, Green was named to The Sporting News’ 1960 All-Star rookie team.

Off The Charts: Green was only 61 when he died of heart problems in 1996. At that time his widow, Mona Green, said her husband’s greatest baseball memories were of playing on the same team as Roberto Clemente and pitching against the New York Yankees in the World Series.

His son Gary was a first round pick of the Padres in 1984 who went on to play about a hundred games in the majors over parts of five seasons for them, the Reds, and the Rangers. Gary then coached and managed in the minors for several organizations