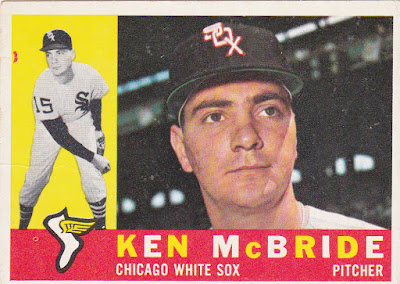 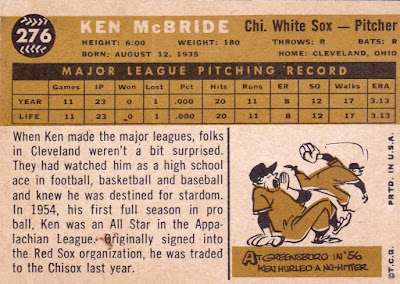 Career: McBride signed with the Red Sox when he came out of Cleveland's West High School in 1954. He immediately impressed with an 18 win season in Class D ball. He then spent another four years in their system with decent numbers but was dealt to the White Sox in 1959 and made his major league debut that August. He pitched well in that game and the few others he got into for the eventual AL champs but wasn't part of their post-season roster.

Side note here: Baseball Reference lists his minor league time in '59 (19 starts in 26 games) as being with the White Sox' club at Indianapolis but he was sold to Chicago on August 1 of that year so I'm at a loss as to whats really up here. Maybe he pitched for the White Sox' organization while under contract to Boston. These little things bug me.

Anyway, Chicago let McBride go to the Angels in the expansion draft and he hit his stride on the West Coast. He became the Halos' ace and won 36 games in his first three seasons there beginning in 1961. He even earned the start for the AL in the '63 All-Star Game.

McBride hurt his arm in his second start in 1964 (he insisted on remaining in the game after a long rain delay) and was never again an effective pitcher. He was up and down between the Angels and the minors for two years and then retired.

In 1960: McBride pitched for San Diego in the PCL and had nice numbers. That earned him another late season call and he appeared in five games for Chicago that September. He was 0-1 while pitching 4 2/3 innings.

McBride tried to stay in baseball. He managed in the minors for a year, and in the 1970s worked as a minor-league instructor and coach for the Milwaukee Brewers. In 1974 and 1975, he was the team’s major-league pitching coach. However, McBride said, “There wasn’t any money in baseball at the time unless you were a player.” After the 1975 season, at the age of 40, he moved back to Cleveland to raise his family. He became the co-owner and CEO of a construction company. As of 2008, he was still married to his high-school sweetheart, had two grown children and two grandchildren, and was still going to work every day at age 73. He remained a big fan of baseball and his hometown Indians, and watched their games every chance he got.

The Card: Old Comiskey Park makes an appearance. That red spot on the yellow background of the action shot doesn't seem to be on every copy of this card, only mine. But I swear that it's part of the card, not a stray ink mark.

Check that, I found another one that was on eBay. Maybe I've got a rarity!! Maybe I'm rich!! 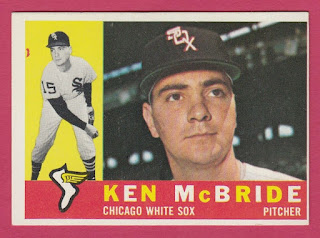