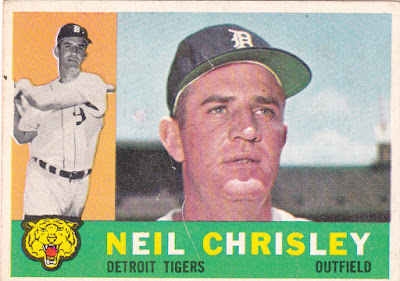 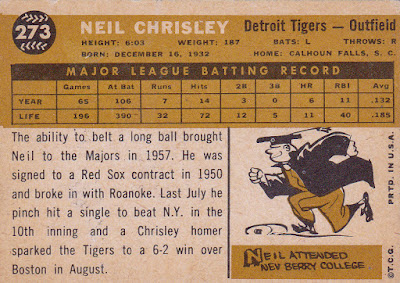 Career: Neil Chrisley was a left-handed bat off the bench and a spare outfielder for the Senators, Tigers, and (very briefly) the Braves over five seasons from 1957 through 1961. He signed in 1950 with the Red Sox out of Newberry College in 1950. He was an impressive minor league hitter but it took him several years, several organizations, and some military time before he made the Senators club in '57.

1958 and 1960 (with Detroit) were his two busiest years. He appeared in about 100 games and had about 250 at-bats in each. He hit .210 for his career with 16 homers. Chrisley finished with the Braves in 1961 by getting a handful of pinch-hitting chances. He was done with the majors, but not pro ball. He spent another three seasons playing at the AAA level for three different clubs.

After baseball he went into the insurance business.

Off The Charts: Chrisley had the only hit (a first inning double) when the Tigers fell to the Red Sox' Bill Monbouquette's one-hitter in May of 1960. Exactly a week later he had his only 2 homer games. He hit both of Johnny Kucks of the Athletics.

His given name is Barbra O'Neil Chrisley.