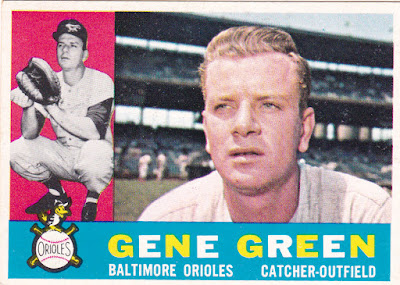 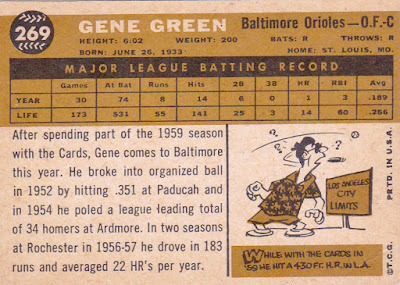 Career: I covered Gene Green's career a few months back when his card arrived as one of the last in my 1960 Leaf set chase. You can go there with this link.

In 1960: He played nearly all year at Miami, the Orioles' top farm club and hit .275 as the Marlins' #1 backstop. There were a ton of future and former big-leaguers on that Miami club. That includes 20-year-old Dave 'Swish' Nicholson who fanned 22 times in 56 plate appearances.

Green played in one game for the Orioles late in September. He got a hit in four trips.

Off The Charts: The Rochester sports blog Pickin' Splinters named Green as the best catcher in the history of the Red Wings' franchise.

The list of best plate protectors in Red Wings history:

1. Gene Green. Green impacted the Red Wings even after he left Norton Street, when he faced his former team in Miami as a member of the original Marlins, an International League team. Green hit two home runs in a doubleheader on April 26, 1960, one to tie the first game and the other a go-ahead grand slam in the nightcap, to pace the Marlins to a 4-1, 5-3 sweep.

“Green for Governor!” Democrat and Chronicle sportswriter George Beahon quoted one fan exclaiming after the 26-year-old’s slam to left-center field.

The IL Rookie of the Year was a strong candidate for public office after the 1956 Governor’s Cup championship season. He batted .300 with 23 home runs and 96 RBIs, the latter two numbers representing Triple A career highs.

“The Animal” was a double shy of the cycle in Game 7 of the Governor’s Cup Finals in Toronto, driving in five of the seven Red Wing runs.

“I didn’t believe it last night and I didn’t believe it this morning until I read the paper- twice,” Green cracked to Beahon the next day. Few were stunned when the catcher, who also played outfield, was posthumously inducted to the Red Wings Hall of Fame in 2011.

The Card: The drawn 'bird' logo on Green's cap in the B&W action pic is laughable.