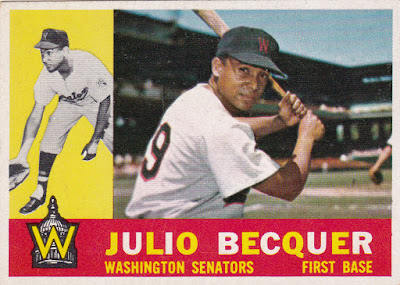 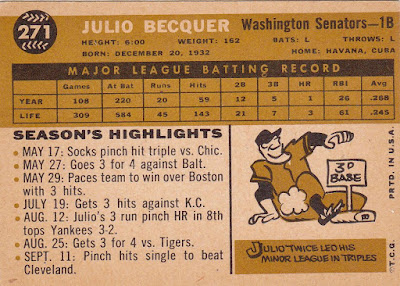 Career: First-baseman Julio Becquer was another in a long line of players scouted and signed by Joe Cambria. Cambria worked for the senators for many years and had and eye for talent which he uncovered in Cuba and in the Negro Leagues.

Becquer, renowned for his glove-work at first, began in the Senators organization in 1952. There are gaps in his record at Baseball-Reference but he did make the Senators in 1955 and appeared in 10 games. He spent '56 at AAA and returned to D.C. for the '57 season and played for the Nats as a pinch-hitter and backup at first through 1959. His only year even approaching full time starting status was 1960.

He was taken by the Angels in the expansion draft, was quickly sold to the Phils and then back to his original team which was by then the Twins. Back to the minors went Becquer for '62 and he made one pinch-running appearance for the Twins in 1963 and then was out of baseball.

Off The Charts: He got the call to the mound in the second game of an August doubleheader in Kansas City. He game up a two-out homer to Dick Williams in an 8-3 loss. He got another shot at pitching the next season, again in Kansas City, again in a doubleheader. This time he was summoned in the seventh inning of the first game and he poured gas on the 6-1 fire by allowing two singles followed by two doubles as five runs came across. He got out of it by getting Deron Johnson to ground out. Sam Mele brought him back out for the eighth and he only allowed a walk.

He was inducted into the Cuban Baseball Hall of Fame in 1997.