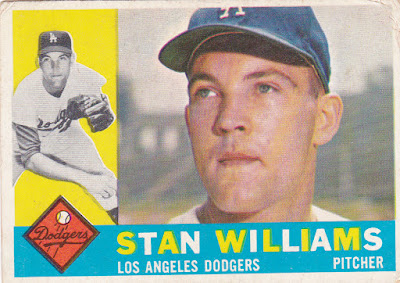 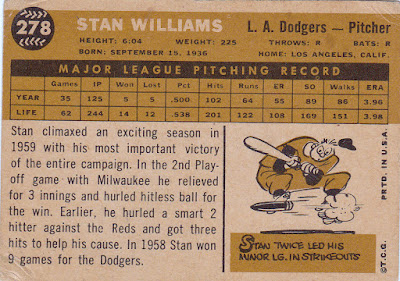 Stan Williams  Los Angeles Dodgers
Career: Stan Williams, a Denver native, signed with the Brooklyn Dodgers in 1954 and worked his way up through their system over the next three seasons. In '58, with the club now on the West Coast, Williams had a fast start at the AAA level and was called to Los Angeles early in the summer. He made 21 starts and went 9-7 and he carved out a place for himself among the Dodgers' top shelf staff.
Williams, who at 6'3" 225 lbs was an imposing figure on the mound, won 43 games between 1959 and 1961 for the Dodgers. He averaged 163 strikeouts over that span.
In 1959 Williams lost his regular rotation spot in the second half of the season but got a huge win with three hit-less innings to wrap up the second playoff game over the Braves. He was traded to the Yankees for Moose Skowron in November of 1962 and was in the Bronx for two seasons, one as a starter and the next primarily out of the bullpen.
Williams moved on the the Indians, Twins, Red Sox and Cardinals before hanging up his glove and turning to coaching in the early 70s.
Williams served as a pitching coach for 14 MLB seasons, with the Red Sox, Yankees, Seattle Mariners, Chicago White Sox and Cincinnati Reds. He was also an advance scout for the Tampa Bay Devil Rays and Washington Nationals.
In 1960: Williams went 14-10 and made the NL All-Star squad. He was credited with a Hold in the second ASG of that year with two scoreless innings.
Off The Charts: Williams pitched very well in all of his postseason appearances. With the '59 Dodgers (World Series), the '63 Yankees (World Series, and the '69 Twins (ALCS) he totaled 11 innings over four games, allowed only three hits, no runs, and fanned eight. You can probably add the '59 playoff game since it was essentially a post-season game.
The Card: The yellow/blue/white combo and the Memorial Coliseum backdrop make for an attractive card.
Posted by Commishbob at 6:30 AM