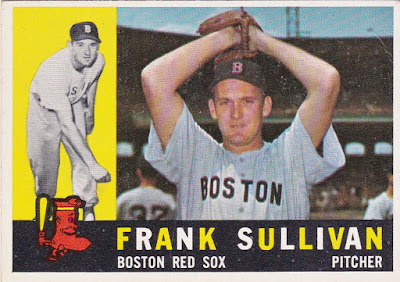 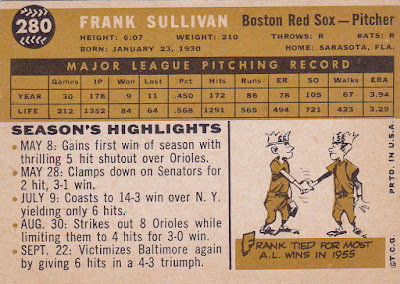 Career: Hollywood native Frank Sullivan had a nice run with the Red Sox in the mid-50s. He won 83 games over six seasons from 1954 through '59 for some less-than-impressive Boston clubs. He was twice and All Star and had a 3.24 ERA in that stretch. He tied Whitey Ford and Bob Lemon for the AL lead with 18 wins in 1955. he was the AL's WHIP leader in 1957 (although nobody then had thought of tabulating that stat).

Sullivan had debuted in Boston in 1953 by pitching rather unimpressively in 14 games. That shot had come after a long minor league stretch and a couple of years in the service during the Korean War. But in '55, as noted above, Sullivan came into his own and had a great run in Fenway. He remained with Boston through 1960 and then wrapped up his career with the Phils and Twins.

In 1960: This was Sullivan's last year for the Red Sox. His numbers dipped significantly from his days as the Sox' 'ace'. His ERA, which had never been above 4.00, ballooned to 5.10 and he lost sixteen against six wins.

Off The Charts: Sullivan's BR Bullpen page tells us..."Frank was the losing pitcher in the 1955 All-Star Game when he gave up Stan Musial's 12th-inning home run. Overall, he pitched creditably after entering in the 8th inning with the score tied, 5-5, and holding the National League scoreless for three plus innings. At the time, the only player in the majors taller than Sullivan was 6' 8" Gene Conley, the game's winning pitcher. Strange but true, after the 1960 season Sullivan was traded to the Philadelphia Phillies for Conley."

Sullivan was the model for one of the players in Norman Rockwell's painting entitled The Rookie. That's Sullivan wearing the #8 in the lockerroom. 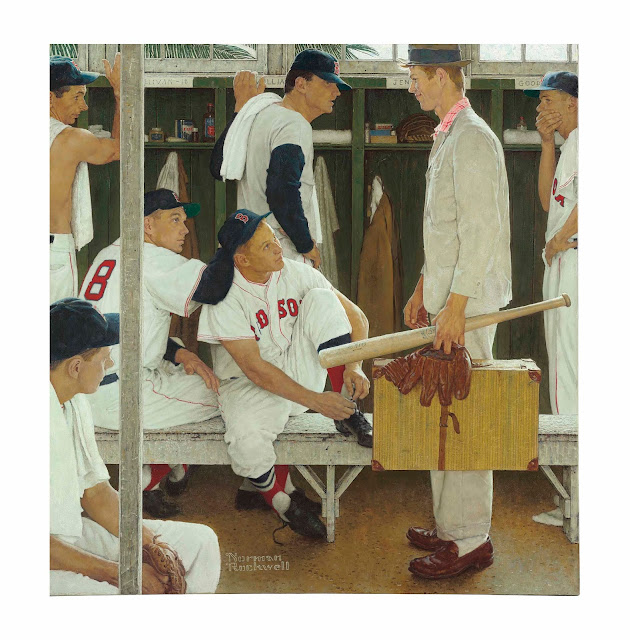