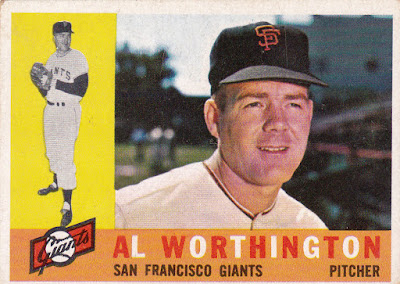 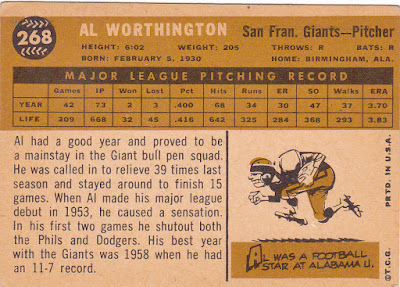 Career: Alabama-born Al Worthington played baseball and some football for the Crimson Tide before signing a pro baseball contract with the Nashville Vols of the Southern Association. When he signed in 1951 Nashville was a Cubs affiliate. The club became part of the Giants chain the next year and Worthington became Giants' property. I have no idea how that worked and his SABR bio has formatting errors so it is not much help.

But in the end, Worthington, showing promise, spent the 1953 through '55 seasons bouncing back and forth between the Polo Grounds and the scrubs. He was a starting pitcher for the most part but, like a lot of guys back then, also made quite a few relief appearances. In '56 Worthington nailed down a spot in the Giants rotation and spent four seasons with the club while moving to a relief role permanently.

Worthington pitched in the World Series in 1965 and his last big league appearance came in the AL Playoffs series versus the Orioles in 1969. He went on to become a coach in the bigs and then took the head coaching job at Liberty University and later became their AD.

In 1960: This is the second consecutive card I've posted of a player who didn't play for the team he is depicted with in 1960. In a nice bit of serendipity, Worthington was traded to the Red Sox for Jim Marshall in late March. After spending much of the season in the minors, he was moved to the White Sox in what was termed a 'conditional deal' late in August. For the year he was a combined 1-2 in 10 games. His minor league stats at AA Minneapolis were really good. Given his later success with the Twins, there must have been something about the Minnesota air that agreed with him.

Off The Charts: Worthington, a deeply religious guy, was bothered by the cheating he noticed with both the Giants and White Sox. Both clubs were reportedly stealing signs and Worthington expressed his issues with that to his managers, Bill Rigney in San Francisco and Al Lopez in Chicago. Worthington has always maintained that his doing so led to the trades form both clubs. In one instance he walked away from the game for a bit because of the issue. Details in this story on the Alabama.com site (you'll need to turn off any ad-blocker to read).

The Card: I'd call this a near perfect example of what the 1960 set can be. Really nice portrait of Worthington with an unusual color combo and the preferred (by me at least) cream and gold back. Just a great card.

One issue though...the cartoon labels Worthington a football 'star' at Bama but his bios state that he only played sparingly and had more success on the diamond there.